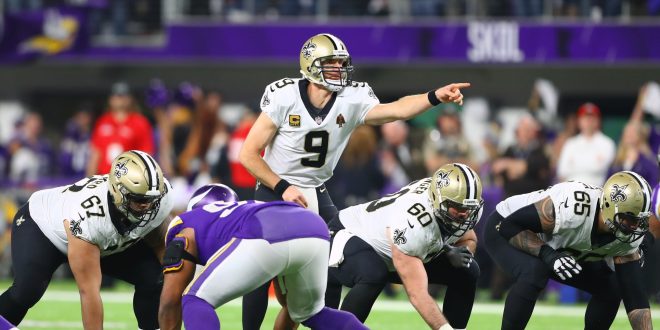 The 39-year-old quarterback is set to hit the free agency market this offseason and there has been some speculation about the future Hall of Famer’s future.

After the shocking loss to the Minnesota Vikings in the NFC Divisional Round last Sunday, the quarterback emphasized that he wanted to stay in New Orleans.

Many experts expect the veteran quarterback to be back with the Saints next season but have not counted out other possibilities.

In a league filled with sub-par quarterback play, Brees would be a hot commodity in the free agent market. Experts have filed the John Elway and the Denver Broncos as the favorites if Brees can’t reach a new deal with New Orleans.

Even though Brees is past his prime, the QB is still putting up some solid numbers. In 2017, he threw for more than 4000 yards and 23 touchdowns.

New Orleans will not be able to franchise tag Brees. His most recent contract extension features a clause stating he could not be given the franchise tag.

If Brees returns to New Orleans he will be returning to an excellent offense. The Saints were ranked No.1 in the league in total yards in 2017.

After the postseason loss to the Vikings, Brees talked about how he is optimistic about the future.

I love you Who Dat Nation. And I love our team. We are destined for great things

This past season the QB was the veteran presence on an offense that consisted of rising stars Micheal Thomas and Alvin Kamara.

Previous Around the SEC in Men’s Hoops
Next Sumlin Moves On From Aggies, heads to Arizona