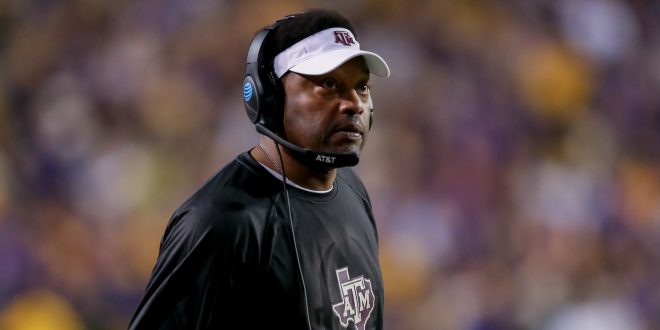 Sumlin Moves On From Aggies, heads to Arizona

Expectations for Kevin Sumlin after the 2012 season reached unbelievable levels. After 2012, Sumlin’s first year in College Station, they had a Heisman winning quarterback and crushed Oklahoma in the Cotton Bowl 41-13. That season he also led Texas A&M to a victory over Nick Saban and #1 ranked Alabama. Sumlin was Texas A&M’s first coach after they moved to the SEC. That same year he led them to a top 5 AP poll finish. In Sumlin’s first year he was able to propel Texas A&M into the national conversation. In 2014, after the departure of Johnny Manziel to the Cleveland Browns, the Aggie’s dropped to a record of 8-5. Sumlin’s Aggies went on to go 8-5 in the next 3 seasons. Ultimately leading to his exit. During his time at College Station, he led the Aggies to a (51-26) record.

Texas A&M went in a different direction last month when they replaced Sumlin with Florida State’s Jimbo Fisher. Fisher looks to bring the Aggies back to 2012 form. He decided to leave FSU this season after coaching his worst record by 4 games (5-6) since arriving in Tallahassee. Texas A&M will undoubtedly be excited for the arrival of Fisher and will have high expectations for the coach with one National Championship already under his belt.

Breaking: Arizona has reached an agreement to hire Kevin Sumlin as coach, as first reported by SiriusXM and confirmed by ESPN. pic.twitter.com/xOOLIBNL9Z

Expectations are much lower and more reasonable at Arizona than Texas A&M. Arizona does not have the same pedigree or allure that Texas A&M does. Arizona, typically known as more of a basketball school, hasn’t had much success on the gridiron in their history. Sumlin replaces former Arizona head football coach Rich Rodriguez after his removal stemming from sexual misconduct allegations. Sumlin is ready to make Arizona an efficient and dangerous offense. Returning quarterback Khalil Tate is an exceptionally talented dual-threat QB, and was even shortly considered for this years Heisman. The combination of Tate and Sumlin is sure to intimidate the Pac-12 and maybe even make a splash nationally in the polls by the end of 2018.

Remember what Kevin Sumlin was able to do with Johnny Football? Now he has Khalil Tate. https://t.co/8K1JvcikGT

Previous Drew Brees Future With New Orleans In Question
Next Preview: Missouri Looks to Even Series Against Tennessee