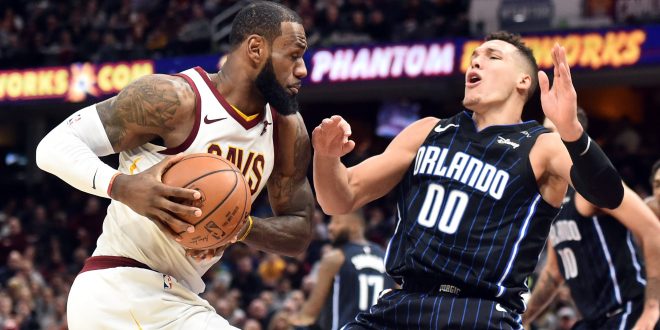 Magic Fail to Cap Comeback Against the Cavs

The Orlando Magic have now dropped 17 of their last 19 games including a 104-103 road loss to the Cleveland Cavaliers on Thursday night. The Magic didn’t, however, go down without a fight. After trailing by as many as 23 points in the second quarter, Orlando rallied to take a one-point lead with 31 seconds left in the game. Unfortunately for the Magic, Cavs guard Isaiah Thomas would draw a foul while driving to the basket and sink two free throws with 11.2 seconds left to make the score the eventual final.

Prior to the win over the Magic, the Cavaliers had dropped four consecutive games. Cleveland won despite LeBron James not playing up to his usual standards. James finished with just 16 points. He had a lackluster game from the free-throw line, shooting 2 for 8, and committed six turnovers.

Where James left off, though, Thomas and forward Kevin Love picked up the slack. Love posted yet another double-double with 12 points and 11 rebounds. Thomas led the way offensively with a team-high 21 points.

Perhaps the biggest headline prior to tip-off was the much-anticipated return of Cavs guard Derrick Rose. He had missed more than two months of playing action. The former league MVP finished the game with nine points in 13 minutes of playing time.

As the score would indicate, the total team stats were almost even.

The difference maker was Orlando’s lack of three-pointers. This season they’re 24th in the league in three-point shooting percentage (35.2%) and on Thursday they continued to shoot poorly from beyond the arc (22.7%).

Orlando will be the beneficiary of a few days rest but will face a difficult test in their next game. They’ll hit the road to take on the Eastern Conference-leading Boston Celtics on Sunday at 1 p.m.

I'm an above-average golfer with surprisingly great touch around the greens. Click on my twitter link for some sports talk.
@Ry_McGinn
Previous Dominant Performance From Gator Women’s Basketball Leads to First SEC Win
Next NBA All-Star Game: Starting Lineups and What to Expect