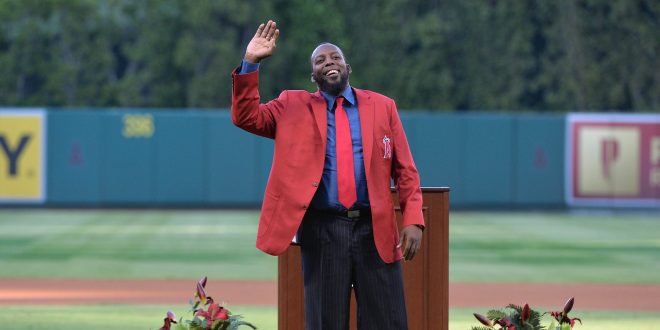 Vladimir Guerrero could soon find himself  in the baseball Hall of Fame. While the National Baseball Hall of Fame will make the official announcement of inductees Wednesday, votes are looking promising so far for Guerrero. To be inducted, candidates must receive over 75 percent of the vote. The votes come from members of the Baseball Writers’ Association of America.

Guerrero had an impressive 15-year career. He came up to the big leagues at just 22 years old with the Montreal Expos. Guerrero would spend the majority of his career there and in Anaheim with the Angels. He had eight seasons with 30+ home runs, 13 seasons with a batting average over .300 and won the MVP in 2004. His career stats are as follows:

Guerrero was named the 2004 MVP for his season with the Los Angeles Angels of Anaheim. He posted a .337 average, hitting 39 home runs and collecting 126 RBIs. Guerrero spent most of his career in Montreal and Anaheim. He played his first full eight seasons with the Montreal Expos. He then moved on to Anaheim, where he spent the next six seasons. After spending one season with the Texas Rangers and one with the Baltimore Orioles, he retired at 36.

Guerrero was known to have an aggressive approach at the plate, swinging at a vast variety of pitches all over the strike zone. This is possibly one of the more intriguing aspects of his approach, because he still managed to hit for average. He also had speed, with notable back-to-back seasons accumulating 35+ stolen bases. His on-base percentage was often high; however, this could be in part to the 250 intentional walks he received over the course of his career.

Defensively, he was known to have a strong arm, collecting a career total of 126 assists. He had 125 errors over the course of his 15 seasons.

Guerrero took six trips to the postseason, was named to the All-Star team nine times, won eight Silver Sluggers and was named the 2004 MVP.

Dominicans in the Hall of Fame

Guerrero would be just the third player in the Hall of Fame from the Dominican Republic. Pitchers Pedro Martinez and Juan Marichal are the other two Dominican players, which would mean Guerrero would be the first to enter as a hitter.

Inductees will be announced Wednesday. Guerrero has not announced whether he would enter as an Expo or Angel. He would be the last Expos player or the first Angels player to join Cooperstown.

Born and raised at the ballpark! Typically quiet- until it comes to sports. I'm a South Florida native with a passion for baseball nearly as strong as my faith. Grew up in garnet + gold, turned out sporting orange + blue. Likely to be found with a camera. And yes, I take food pictures.
@victoriarossman
Previous No. 20 Florida Ready For Revenge Against South Carolina
Next LeBron Nears 30,000 Career Points