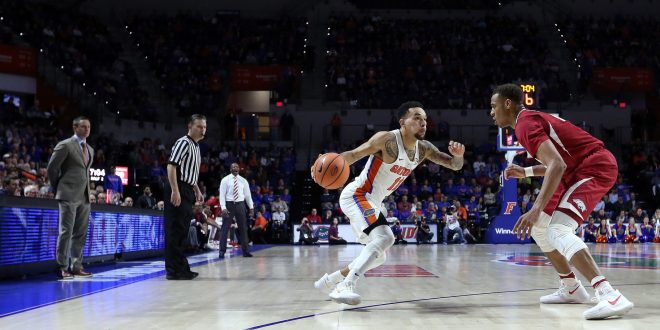 No. 20 Florida Ready For Revenge Against South Carolina

It’s been almost a year since the South Carolina Gamecocks took down the Florida Gators in the Elite 8 at Madison Square Garden en route to their first Final 4 appearance in program history. On Wednesday night, the Gators will have their first shot at revenge since that pivotal match-up at the Mecca of Basketball. UF and SCAR are set to tip-off at 7 p.m. from Exactech Arena on the SEC Network.

The Florida Gators have re-entered the AP Poll for the first time since December 11th after taking down the Kentucky Wildcats on Saturday night in Lexington. UF came in at No. 20 in Monday’s AP Poll, missing out on the No. 19 spot by just 5 points. The Gators have won 8 of their last 9 games and are averaging 76.6 points per game in victories over that span. They’ve also only allowed 66.1 points per game during those 8 wins.

Jalen Hudson earned SEC Co-Player of the Week honors, along with Texas A&M’s Tyler Davis, after averaging 19 points, 7.5 rebounds and only 1 turnover per game during Florida’s games last week. Chris Chiozza has also been excellent during conference play as well, and is averaging 11.3 points, 6.6 assists 3.3 rebounds and 1.4 turnovers per contest in SEC games this season.  Chiozza ranks 14th in the NCAA in assist-to-turnover ratio and 20th in assists per game.

The Gators are ranked 1st in offensive efficiency, 1st in three-point percentage, 1st in turnover-margin and 4th in effective field-goal percentage in the SEC. Florida is also allowing the fewest free throw attempts per field goal attempts on the conference. UF has done a great job of playing team defense without committing an excessive amount of fouls as of late.

This is not last year’s South Carolina Gamecocks. While the team is still solid defensively (25th in the nation in defensive efficiency), the offensive talent of Sindarius Thornwell and P.J. Dozier have moved on to the NBA/G-League. P.J. Dozier is actually playing on the Oklahoma City Thunder’s G-League affiliate with former Gator Justin Leon. While there’s been a lot of turnover on the Gamecocks’ roster, Chris Silva still remains. The 6’9″, 223-pound Gabon native is ranked third in the SEC in rebounds per game and has recorded four double-doubles on the year.

Silva is averaging career-highs in points per game (14.5 PPG), rebounds per game (7.8 RPG) and assists per game (1.1 APG). He’s also ranked 1st out of 2,142 D1 players in free throw rate and 2nd in fouls drawn per 40 minutes. While the junior forward struggled against Tennessee in the team’s most recent game, recording only 6 points and 5 rebounds on 4-10 shooting from the free throw line, Silva posted 27 points and 8 rebounds just two games ago vs. Kentucky. Florida has consistently struggled against big men this season, especially those with a strong inside game. If the Gamecocks want a shot at beating the Gators, it’ll start with Chris Silva.

As mentioned before, the Gators are 1st in the SEC in turnover margin. Wednesday’s tilt may test Florida’s ability to protect the ball as South Carolina ranks 1st in the conference in opponent turnover percentage, forcing giveaways on 20.8% of their defensive possessions. The Gamecocks have forced at least 13 turnovers in all 7 of their SEC contests. The Gators have only turned the ball over 13 times or more once during conference play (Jan. 10 vs. Mississippi State).

Mike White had no update on John Egbunu and Isaiah Stokes who are both out until “late January.” White said that he hasn’t asked for an update on them from the team’s trainer Duke Werner in “a week or two.” South Carolina guard Tommy Corchiani (knee) is questionable for Wednesday night’s game, while guard Kory Holden (hamstring) is out indefinitely.

Wednesday night’s game is a 7 p.m. tip and can be seen on the SEC Network with Mike Morgan and Pat Bradley on the call. You can listen to the game on the Gator IMG Sports Network or Sirius 137/XM 190 with Mick Hubert and Mark Wise.

Previous Ole Miss Looks to Bounce Back Against Alabama
Next Vladimir Guerrero: A Potential Hall of Fame Inductee