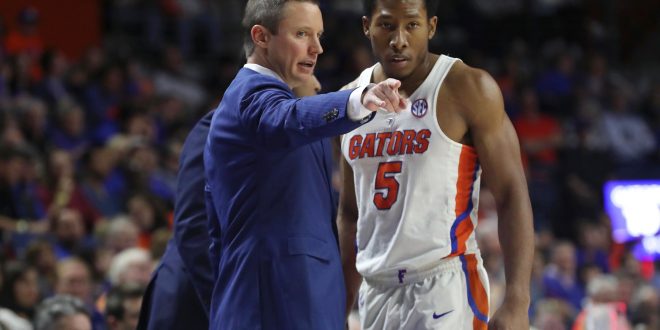 No. 23 Florida Looks to Bounce Back in SEC Play Vs. Georgia

Fresh off a dominating win against Baylor in the Big 12-SEC Challenge, the Florida Gators head to Athens to take on the struggling Georgia Bulldogs. The Bulldogs have lost three straight games and five of their past six. The Gators have defeated the Bulldogs the past four times these teams have met. While Florida has had the edge recently, there’s no such thing as an easy SEC road game.

They have been terrible offensively, especially since the start of conference play. The Bulldogs average 69.3 points per game, which is the least in the SEC. Georgia is also atrocious shooting from deep, connecting on 31.6% of their long-range attempts. If Georgia had another top-notch scorer to pair with Yante Maten, they would be a very competitive team at the top of the SEC. William Jackson II is a quality SEC point guard but doesn’t produce much firepower on the scoring end (9.5 points per game). Without this legitimate scoring option to pair with Maten, the Bulldogs have struggled mightily over the past month.

Yante Maten does it all for this Bulldog squad. He is averaging 19.6 points, 9.2 rebounds, 1.8 assists and 1.5 blocks per game while shooting 47% from the field, over 35% from beyond the arc and 85% from the foul line. The 6’8” senior leads the SEC in scoring and is 2nd in rebounding, only behind Robert Williams of Texas A&M. Maten is the only Bulldog to average double-digit scoring. The Georgia coaching staff has done an incredible job developing the former 3-star recruit.

Mike White had a lot of praise for Maten before Tuesday night’s matchup.

Even though the Gators lost a disappointing contest against South Carolina last week, they have won 9 of their previous 11 games and sit in second place in the SEC at 6-2. Chris Chiozza has been playing like one of the best point guards in the country, while Jalen Hudson, Egor Koulechov, and KeVaughn Allen complete the Gators’ core four. Size has continued to be a major issue all season. With John Egbunu and Chase Johnson returning before the end of the season, the Gators are a team that everyone will fear heading into tournament play.

Tuesday night’s game is set to tip-off at 7 p.m. It can be seen on SEC Network with Tom Hart and Jon Sundvold or streamed on the WatchESPN app. You can listen on the Gator IMG Sports Network with Mick Hubert and Mark Wise.