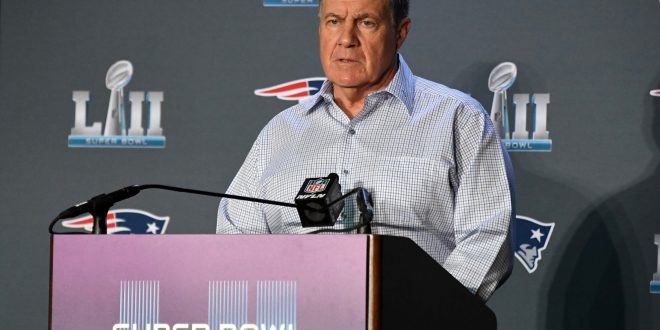 Belichick Looking to Add to His Legacy With Win On Sunday

Bill Belichick is no stranger to the Super Bowl.

Belichick will be making his eight Super Bowl appearance as the head coach of the New England Patriots. He also made won two Super Bowls as a defensive coordinator with the New York Giants. In total, he will be participating in his 11th Super Bowl on Sunday.

Patriots head coach Bill Belichick will now coach in his 11th Super Bowl out of 52 in total. That's 21.2% of them. Completely incredible.

The future hall of famer has had a lot of success in the big game as he has seven championship rings. Five of them with his current quarterback Tom Brady. Even though Belichick has made it to Super Bowl Sunday plenty of times, he says that every trip is unique in it’s own way.

Belichick has enough Super Bowl wins to fill a hand and then some. Yet, every season the head coach is just as focused, rarely showing any emotion.

When asked about how much longer he would want to keep coaching, the 65-year old said that his focus is on Sunday.

Preparing For The Eagles

One of the many reasons why Belichick has been so successful for so long is his preparation. He respects every single team in the league no matter the record and that’s not changing with the Philadelphia Eagles.

The Eagles player Belichick is preparing himself the most for is quarterback Nick Foles. The head coach recently pointed out that he was impressed by how Foles stepped in in Week 14 against the Los Angeles Rams. Belichick says that it’s his decision making that makes Foles successful.

As for the team as a whole, Belichick says that the reason why the Eagles have made it this far is because they are good at everything.

Ready to Write The Next Chapter

Belichick is four quarters away from being at the football mountain top for the eighth time.

Previous Tennessee Looks for Easy “W” Tonight vs. LSU
Next Kirk Cousins: Where Will He Go?