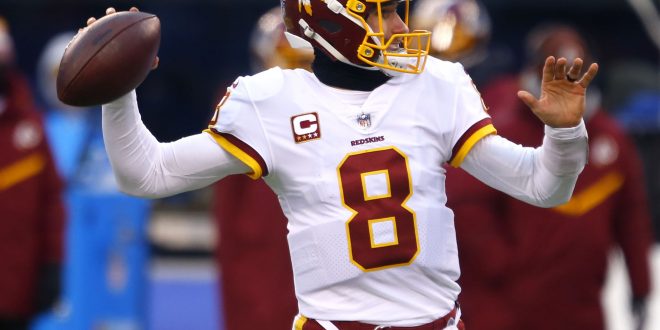 Kirk Cousins: Where Will He Go?

One of the first big news of the NFL off season was announced Tuesday with the Kansas City Chiefs trading Alex Smith to the Washington Redskins. This means Kirk Cousins will hit the open market in March. With Smith now at Washington, this leaves Cousins as potentially the premier offseason agent.

With that being said, Cousins has many organizations looking his direction. Here are some of the teams Cousins is likely to land at:

Kirk Cousins, the only QB ever to receive the franchise tag twice, now will leave Washington. Teams expected to be in QB market include Buffalo, Cleveland, Denver, NY Jets, amongst others.

The Broncos are considered the favorite for landing Cousins. It has been reported that the Broncos will go all in to sign the veteran quarterback; even after spending time with two first round quarterbacks, Baker Mayfield and Josh Allen. With free agency options being only strong at a couple positions this offseason, it would make sense for Denver to fill their quarterback position via free agency. The Broncos can use the draft to fill other major positions that they need, since this year’s draft is strong in multiple positions; especially since the Broncos have a top five pick in the draft.

According to NFL staff writer, Chris Wesseling, the veterans on the Broncos defense are major Cousins fans as well as head coach Vance Joseph. Executive Vice President of Football Operations and General Manager of the Denver Broncos, John Elway, has succeeded with the signing of a veteran quarterback before. After signing veteran Peyton Manning in the 2012 season, the Broncos went on to win the AFC Championships in 2013 and 2015 and win Super Bowl 50 in 2015. Elway could be thinking Cousins is a good pick to giving the Broncos an opportunity to win big again.

For Minnesota, all three quarterbacks, Case Keenum, Sam Bradford and Teddy Bridgewater, are due to be free agents. Rookie Kyle Sloter is the only quarterback scheduled to be under contract for the 2018 season.

On top of these teams, other possible landing sites include: the New York Jets, the Cleveland Browns, the Buffalo Bills, and the Jacksonville Jaguars. However, according to Wesseling, the Broncos and the Jets seem to be the favorited candidates.

Ultimately, Cousins says money is definitely a factor in his decision, but it’s not the only factor. Since he’s been franchise-tagged twice, his main focus is on winning. He wants to be in the best possible place where he can win.

However, reports say that Cousins is on the lookout for a contract that pays $30 million a year.

Sydney is a senior studying telecommunications with a specialization in sports media at the University of Florida. She is a multimedia sports reporter for ESPN 98.1 FM/850 AM WRUF and WUFT-TV.
Previous Belichick Looking to Add to His Legacy With Win On Sunday
Next Former SEC Star Todd Gurley is Dominating at the Next Level