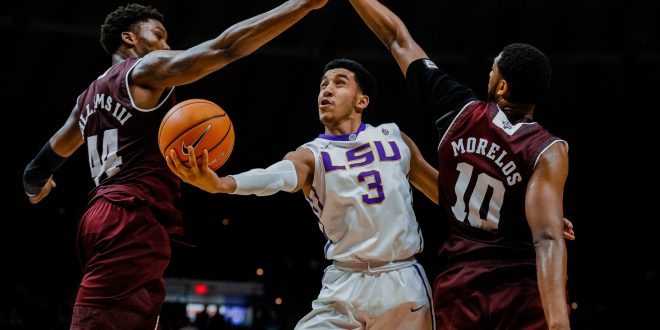 The Tennessee Volunteers (15-5, 5-3) have been playing excellent basketball lately. The Vols have themselves in a good spot after defeating Iowa State (11-9, 2-6) 68-45. Holding the Cyclones to their lowest point total (45) since 2009. Currently sitting at number 18 in the country, Tennessee takes on helpless LSU tonight at 6:30. The Tigers (12-8, 3-5) are having a much different season than the Vols. They are coming off of a 25 point beating at the hands of the league leading Auburn.

LSU head coach Will Wade announced in a press conference Monday that fur of his players have been suspended by the team for separate offenses. Wade did not offer many details on the suspensions. Freshman Galan Alexander Mayan Kirr earned season long suspensions while Wayde Sims and Brandon Rachal are only suspended for tonight’s match-up against Tennessee. The recent rash of suspensions leaves the Tigers with only seven scholarship players available tonight.

For the game against Tennessee, here's who #LSU will have available:

The Volunteers have many advantages tonight when they face LSU. Not only is LSU’s front-court hampered with injuries and suspensions. They also face arguably the best front-court in the entire SEC. Grant Williams and Admiral Schofield are an excellent inside tandem. They both lead the team in points and rebounds. Tennessee is favored by 9.5 points and ESPN’s Basketball Power Index gives them a 86.3% chance of winning tonight. If LSU wants to be competitive in this game Tremont Waters must get a hot shooting hand and score at least 20 points. Waters hasn’t put up over 19 points since January 6, in a win against texas A&M. It will be interesting to see how LSU responds in their first game back since the four suspensions were handed down. Tennessee is one of the hottest teams in the SEC winning six of their last seven.

Previous Kirk Cousins out, Alex Smith in with the Washington Redskins
Next Belichick Looking to Add to His Legacy With Win On Sunday