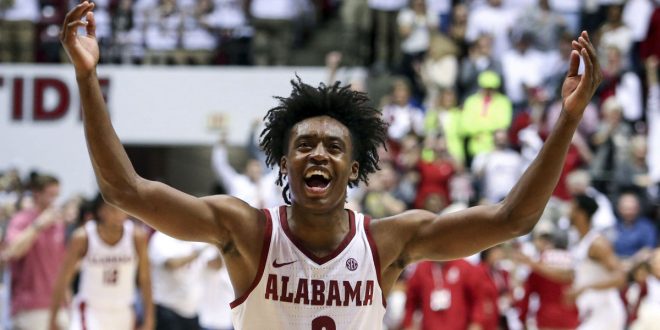 Two SEC rivals square off tonight as Missouri (13-8) takes on Alabama (14-7). A win tonight would put Alabama in a three-way tie for 2nd in the SEC with Kentucky and Florida.

Alabama is coming off a victory over Trae Young and No. 12 Oklahoma on Saturday. They held Trae Young to seventeen points after shooting 6-17 from the field. Former NBA player and coach Avery Johnson is in his third season coaching the Crimson Tide. Alabama has yet to make the NCAA Tournament under coach Johnson, but are on track to surpass last year’s 19-15 record. He said that wins versus teams like Oklahoma are “what we dream of” and he was proud to represent the SEC against such a difficult opponent. Tonight Alabama will have to wake up from that dream, for they now have a target on their back. Expect another big performance from freshman Collin Sexton.

Missouri has had a bit of a rocky season thus far. They sit at No. 10 in the SEC with some questionable losses to teams such as Illinois and Mississippi State. However, they have proved they can compete with elite teams when they knocked off No. 21 Tennessee thanks to some wise late-game decision making by head coach Cuonzo Martin. With only ten games remaining for the Tigers, every game is a must-win. Missouri can’t afford to further distance themselves from conference opponents than they already have on their current three-game losing streak. It doesn’t get easier for Missouri after this matchup, for they still have Kentucky to look forward to on their schedule twice.

Previous Will Mississippi State Pick Up First Road Win?
Next Kirk Cousins out, Alex Smith in with the Washington Redskins