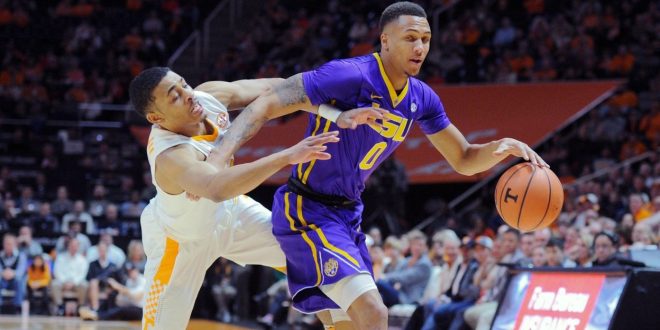 The LSU Tigers fell in their last game of the first half of the SEC season against No.18 Tennessee. The Tigers currently stand at 12-9 overall and 3-6 in the SEC.

The Tigers will host the University of Arkansas’ Razorbacks Saturday afternoon and this may be another tough game for the Tigers. The Razorbacks is currently 16-5 and 6-3 in the SEC, just two games behind No. 1 Auburn, who LSU fell short last week in a 95-70 loss. This leaves the Tigers losing two back to back games in double digits.

This will be an even tougher one for the Tigers who currently have four players suspended for violation of team rules. This leaves the Tigers with only nine men in uniform. Wayde Sims and Brandon Rachal missed the last game due to a violation of team rules. Head coach Will Wade also announced that freshman Galen Alexander and Mayan Kiir would be on a “leave of absence” from the program for the rest of the year. Alexander will not have the chance to return, but if Kiir meets certain conditions, he may return at the end of the spring semester.

It has since been reported sophomore forward Wayde Sims, freshman guard Brandon Rachal and freshman forward Mayan Kiir are all seen in a music video by Baton Rouge rapper WNC Whop Bezzy. The video was released in late December and has more than 340,000 views.

“They made a mistake that young people make,” Wade said. “I think they both regret it, though I don’t want to put words in their mouth … it’s difficult as a coach. It’s not a lot of fun to have those meetings, but it’s something you’ve got to do to maintain a culture and a level of discipline within your program.”

In their last game, the Tigers were left to count on forwards Duop Reath Aaron Epps only. The Tigers shot 39 percent from the field including 3-for-19 from 3-point range.

In the last game, Duop Reath made a statement again, scoring 21 points in 31 minutes of play, so Reath will be a player who we can expect to see step up again.  Randy Onwuasor was in double digits for a second straight game with 10 points in 26 minutes. Aaron Epps had nine and a team-high of seven rebounds. Tremont Water had seven and three assists. Skylar Mays and Daryl Edwards each had six.

Daryl Macon and Darious Hall came out strong, Macon scored 20 points on 7-of-16 shooting, going 3-of-9 from deep. Hall went 13 points on 6-of-6 shooting, while senior guard Jaylen Barford scored 19 of his own, going 7-of-16 from the floor.

If one thing was made clear, is the Razorbacks need a new game plan for their defense if they don’t want another road loss, especially with the scorers LSU has. Especially because we can expect to see the Tigers come out aggressive in hopes to get a road win.

Tough one on the road tonight. pic.twitter.com/NGnIiKapvC

The Razorbacks lost to the Tigers earlier this year in Fayetteville.