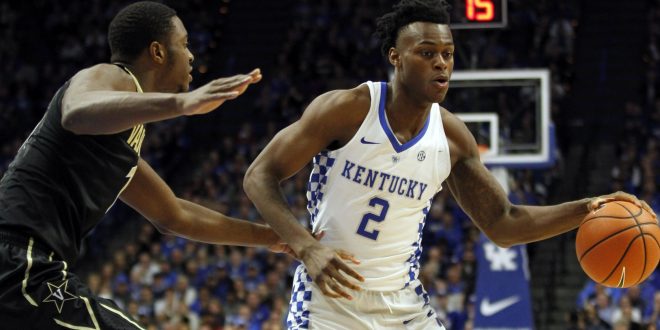 After beginning the season 10-2, despite losing freshman star Michael Porter Jr. in the season debut, the Tigers are currently 2-4 in their last six games. In those six games, Missouri has shot just 40% from the field. In their match-up against Texas A&M, they shot a horrendous 27.8%.

In their most recent game, however, the Tigers were able to get a win in Tuscaloosa against Alabama. They shot 53.2% from the field at 39.1% from beyond the arc. Missouri held the Crimson Tide to 35.4% from the field and 25% from three. This win also gave head coach Cuonzo Martin his 200th career victory.

Wildcats Trying To Find Their Groove

It has been a rollercoaster year for John Calipari and his Wildcats. After dropping two consecutive SEC games against the Florida Gators and South Carolina Gamecocks, they found themselves with a 4-3 record in SEC play.

In their game against South Carolina, Kentucky blew a 14-point lead. This should not be too surprising though because it is the youngest team Coach Calipari has coached, not to mention it is one of the youngest teams in NCAA history.

However, the Wildcats are on a three-game win streak, including an impressive win against West Virginia, who was ranked No. 7 at the time. In their most recent game, Kentucky overcame a 14-point deficit against Vanderbilt, forced overtime and won 83-81.

By now you've seen the dramatic comeback vs. Vanderbilt — our second in a row — but you've haven't seen it like this. #EmbraceTheJourney pic.twitter.com/fiIsDIANV2

How to watch: CBS

Where: Columbia, Missouri at Mizzou Arena