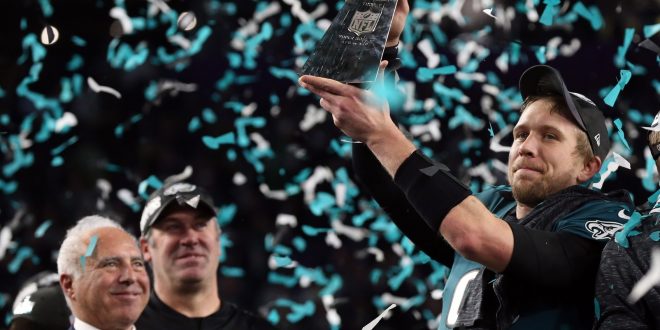 For the first time in the Super Bowl era, the Philadelphia Eagles are the champions of the NFL. With three NFL championships under their belt, the Eagles had the opportunity to win the Super Bowl rematch against the New England Patriots and clinch their first title. They did just that, as Philadelphia defeated New England 41-33 after a late touchdown-ending drive and a field goal.

The Super Bowl: How It Happened

After trading a pair of field goals to start the first half, the Eagles went up by six on a 34-yard pass from quarterback Nick Foles to wide receiver Alshon Jeffery. Foles found Jeffery streaking into the end zone and they connected, giving Philadelphia a 9-3 lead going into the second quarter. Not to overlook, the Patriots scored in the first quarter of the Super Bowl for the first time with quarterback Tom Brady and head coach Bill Belichick at the helm.

Patriots score in the first quarter of the Super Bowl for the first time in the Belichick-Brady era.

The second quarter was a bit more eventful, as the two sides combined for three touchdowns and a field goal. Former Patriot running back LeGarrette Blount found his way into the end zone with the help of tight end Brent Celek‘s block and scored his 11th career postseason touchdown, putting the Eagles up 15-3.

New England would answer back with a Stephen Gostkowski field goal and running back James White‘s touchdown run late in the quarter. White broke a couple of tackles on his 26-yard run, which brought the Patriots to within three. That wouldn’t last long, though, as the Eagles would answer back shortly after.

Foles and the Eagles capped off a seven-play, 70-yard drive with a touchdown pass that Foles caught himself. Tight end Trey Burton, a former Gator, threw a short pass to Foles, who took the one yard reception into the end zone. Philadelphia went up 22-12 going into halftime.

.@TreyBurton8 has a career #SuperBowl passer rating of 118.8.#FlyEaglesFly pic.twitter.com/KGTw4WBQ5v

Foles offered some of his thoughts on his catch after the game.

With the Lombardi Trophy on the line, neither team let up. Both sides combined for three touchdowns in the third quarter. The Patriots opened the second half with a touchdown, as tight end Rob Gronkowski caught a five yard reception to bring them within three. The Brady-Gronkowski combo struck again, and they would connect again later in the half.

Philadelphia maintained a three-point lead after a 22-yard touchdown pass from Foles to running back Corey Clement and a Patriots touchdown pass from Brady to tight end Chris Hogan. The Eagles went into the final quarter of the game with a 29-26 lead.

Kicker Jake Elliott gave the Eagles a bit more cushion, knocking in a 42-yard field goal to put them up 32-26. Brady and Gronkowski connected for another touchdown, giving the Patriots a one-point lead with under 10 minutes remaining in the fourth quarter. Foles’ late-game heroics kept the Eagles alive, and he capped off a 14-play, 75-yard drive with an 11-yard pass to tight end Zach Ertz, who made a leaping grab for the score.

The Eagles attempted the two-point conversion, but they couldn’t convert, leaving them with a five-point lead late in the fourth. Elliott converted on another field goal, knocking in a 46-yarder to give Philadelphia an eight-point lead. The Patriots made things interesting at the end, but Brady’s attempted Hail Mary pass was broken up in the end zone as time expired. That play clinched the Eagles’ first Super Bowl championship.

Eagles head coach Doug Pederson spoke about the go-ahead touchdown from Foles to Ertz late in the fourth quarter and said “a field goal wasn’t going to be good enough” against the Patriots.

Foles talked about this being a hard-fought game and how the team has “fought until the end” all year long.

Brady said they battled hard and were competitive but couldn’t get the job done in the end.

For the past 16 years, a former Gator has played on a Super Bowl team. And for the seventh time in the past eight years, at least one has been on the winning side and will receive a ring. This year former Gators Burton, kicker Caleb Sturgis and defensive back Jaylen Watkins will be included in that group. Eagles General Manager Howie Roseman, a UF alumnus, is also included.

@wclewis_uf
Previous Brady and Belichick plan to return; Gronkowski noncommittal about his future
Next Nick Foles: From Back Up to Super Bowl Champion