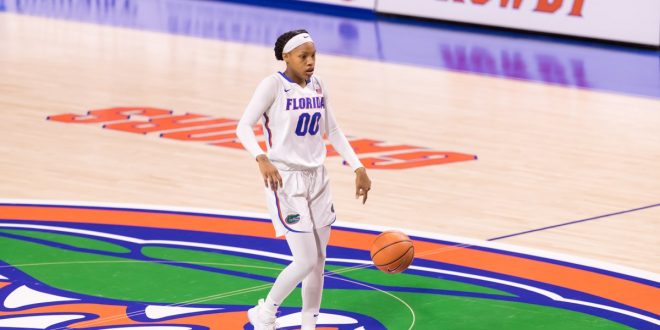 The first half of Florida’s matchup with Mississippi State took many by surprise. The struggling Gators went toe to toe with the Bulldogs, even pulling within 2 points. The Gators were overpowered in the second half but left Starkville feeling positive with the way they played, especially in the first half. The Gators hope to put together two halves of strong basketball when they host the rematch with Mississippi State Thursday night.

In Monday’s 66-64 loss to No. 15 Missouri, the Gators were just seconds away from pulling off the upset win. It took a late game surge from the Tigers that put them over the edge. Florida did everything they needed to do to win that game. They committed only 7 turnovers. The Florida defenders slowed down an elite scorer in Missouri guard Sophie Cunningham, who finished with just 10 points. The Gators even had a breakthrough scoring effort from sophomore guard Delicia Washington. This was not enough for Florida to secure its first win against a ranked opponent this season.

Florida senior guard Dee Anderson said that the team played their best game against the Tigers.

Gators head coach Cam Newbauer was proud the way his team competed for the entire game.

One of the main reasons Florida was able to make its matchup with Missouri a four-quarter contest was eliminating turnovers. All season the turnover bug has infested the Gators. On Monday night, the once turnover prone Gators only committed 7 turnovers. This was the lowest turnover total the team has put up this season.

Anderson said that the limited amount of turnovers helped the pace of the Florida offense.

Game speed is a point of emphasis for Delicia Washington. Those two words are even written on her arm.

Washington said they serve as a constant reminder for her to leave it all out on the court.

Teammate Dee Anderson has noticed the change in speeds at which Washington plays at.

Being that the Gators have seen the Bulldogs just two weeks ago, they know exactly what the second-ranked team in the country brings to the table. They are led by forward Teaira McCowan. She finished the last meeting with a team-high 23 points and 8 rebounds. To slow McCowan down, Florida defenders will have to keep her away from the basket as much as possible. This will prevent second-chance points from McCowan and force her to shoot some contested jumpers.

Another key for Florida will be limiting turnovers. Mississippi State forced Florida into 23 turnovers in the last meeting. They are notorious for an intense defensive pressure that forces teams into making costly mistakes. Limiting turnovers will be a must for the Gators.

Newbauer said that he’s excited about the opportunity his team has in facing one of the best teams in the country.

The Gators and No. 2 Bulldogs will tip-off round two Thursday night at 7 p.m. from Exactech Arena.