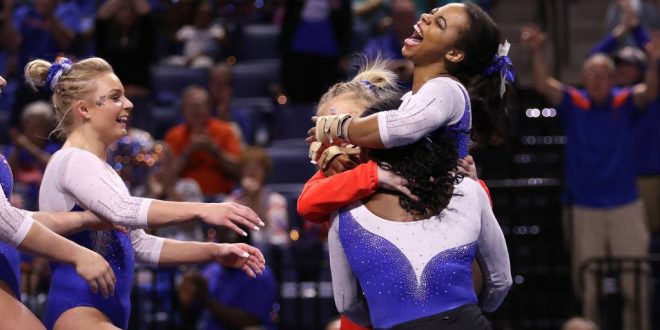 The Gators started the night off on vault. Alex McMurtry led the team with a score of 9.975. Alabama started on the uneven bars with strong performances. Kiana Winston and Mackenzie Brannan led the Crimson Tide with scores of 9.900. The rotation ended with Alabama leading by 0.25.

For the second rotation, Florida moved to the uneven bars. McMurtry again scored the highest for the Gators, earning a 9.950. Alicia Boren was also impressive, scoring a 9.925. The Crimson Tide moved to vault, where Nickie Guerrero led with a score of 9.900.

The third rotation had the Gators on beam and the Crimson Tide on floor. Florida showed their depth with freshman Alyssa Baumann, who earned a 9.925. She tied with McMurtry for the highest score. Alabama struggled on the floor. A fall from Maddie Desch would bring down their average score.

The Gators took the floor and the Tide took beam for the final rotation of the night. Alabama’s Nickie Guerrero again earned their top score with a 9.900. Florida performed strong routines, with Kennedy Baker closing out the night with a perfect 10.

Senior Kennedy Baker took the floor for her only performance of the night. Baker’s performance earned her a perfect 10 and she said she felt confident after she stuck her first pass.

Baker also said she feeds off Boren’s routine before hers.

Florida coach Jenny Rowland says the team has dealt with some struggles but felt they looked strong Friday night.

Florida will be on the road next week for their third consecutive SEC meet. The fifth-ranked Gators will travel to Athens to take on the 13th-ranked Georgia Bulldogs.

Born and raised at the ballpark! Typically quiet- until it comes to sports. I'm a South Florida native with a passion for baseball nearly as strong as my faith. Grew up in garnet + gold, turned out sporting orange + blue. Likely to be found with a camera. And yes, I take food pictures.
@victoriarossman
Previous UF Softball Opens Season with Decisive Win
Next SEC Hoops Preview: No. 24 Kentucky vs. Texas A&M