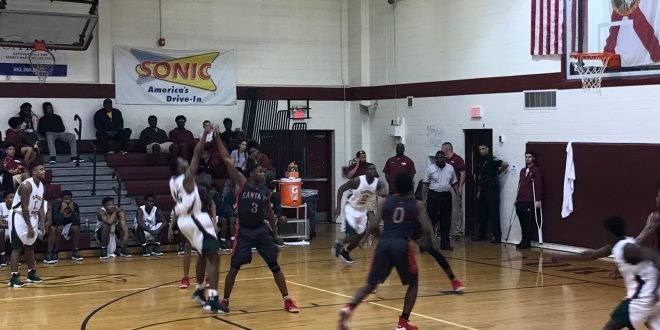 The Eastside Rams (21-5) hosted the Santa Fe Raiders (5-15) at a neutral site at North Marion High Tuesday night to play for a spot in the 6A-6 district championship game this upcoming Friday.

Not only was this game an opportunity to play in the 6A-6 final, but it was also a spot to compete in the FHSAA Boys Basketball State Championship Tournament.

Just to note, Eastside was coming off a tough loss against city rival Gainesville Hurricanes (20-5) this past Friday night, losing for the first time this season to a team who reside in the same city. Prior to the loss, the Rams were on an 8-game winning streak that began on January 19. They’re only loss before that was to North Marion.

For Santa Fe, they have been on the opposite side of the spectrum. Finished the season with an 8-game losing streak, not having the ability to win a game since January 15 (Brandon).

Here at North Marion High all the way in Citra, where Eastside lead Santa Fe 14-10 after one quarter.
First round of District 6 playoffs. Loser goes home. #HighSchoolBasketball @ESPNGainesville

Senior James Pope of Eastside and Jonathan Green of Santa Fe both had 5 points to lead all scorers at the end of the first quarter. Eastside had an early lead after the first eight minutes, 14-10.

Senior James Pope of Eastside leads all scorers with 11 points in the first half. #HighSchoolBasketball

Eastside’s Pope led all scorers with 11 points at the half.

The game got chippy in the second half. Santa Fe, knowing they were the underdog, began to fight their way back into the game.

Eastside later responded with six free throws that kept them in the game. The Raiders didn’t shoot any free throws in the 3rd quarter.

Meanwhile, James Pope, the Rams leading scorer, went quiet from the field in the 3rd. Kofi Asare had to carry the Rams with 5 points in the third quarter, a team high.

Santa Fe’s Jonathan Green dominated inside the paint, scoring most of his buckets to pave the way for a 13 point outing with a quarter left to play.

The Santa Fe Raiders looked like a completely different team compared to the first half. They manhandled the Rams the entire 4th quarter. The Rams lost their rhythm and almost accepted defeat when they were down 42-36 with less than two minutes left in the game.

The Rams were without a doubt in a tough position, while the Raiders looked like they were about to pull the biggest upset of the season. Miraculously, the Rams stole the inbound play from the Raiders, not once but twice in a row to bring them within one point.

WOW! Another steal off the inbounds for Eastside! They miss the layup, Santa Fe recovers but steps out of bounds!
Eastside Ball with 11.9 seconds left in the 4th, they still trail by one.
43-42#Highschoolbasketball

Surprisingly, the Raiders basically let the game slip out of their hands. After the stolen inbound play by Eastside, the Raiders foul Keanis Smart on a wild underneath-the-basket layup attempt. He later knocks down the game-tying free throw to send it into over time.

Keanis Smart’s game-tying free-throw to send the game into over time. pic.twitter.com/pcNkJNGtWr

Malik Robertson began to play in his usual essence, like a man amongst boys. Grabbing every rebound and scoring and-ones underneath the basket with authority. Meanwhile, Deshaun Odem had to play strong defense to transition it to 4 crucial points for the Raiders to keep them in the fighting distance.

The Raiders had possession down three with 33.2 seconds left in the game. They set a high screen that left Saveion Webster wide open on the right. He connects on a high-arcing 3-pointer to tie the game and send it into double over time.

Santa Fe’s Saveion Webster ties the game with a clutch 3-pointer to send it into 2OT!! pic.twitter.com/klHQH3ND3A

Fatigue began to settle in. Most of these players bodies aren’t capable or used to playing these types of minutes. Both coaches were on their feet, hollering at each of their players, trying to lead their way to victory in the most important game of the season.

Noah Richardson scored quickly and easily, Santa Fe responded, then Eastside held the ball for approximately four minutes. The Raiders eventually foul Roberston, sending him to the charity stripe and he knocks down both shots. Rams lead 56-54.

Santa Fe had a chance to tie the game but couldn’t knock it down. The Raiders end up fouling Noah Richardson who only makes one of two free throws.

After Eastside’s made free throw, Santa Fe rushed on a fastbreak and score a layup with .03 seconds left. But, without realizing they needed a 3-pointer to tie the game, the clock runs out and the game ends.

The Eastside Rams have made it into the District 6A-6 championship game and will officially face North Marion (18-7) in an epic rematch after they defeated Dunnellon 56-51. The Rams have also automatically qualified for the FHSAA Boys Basketball State Championship.

Although, Eastside’s head coach Williams wasn’t as pleased as you think. It was a tough game throughout but he thinks there are some improvements he and his team need to make before heading into Friday’s game against North Marion.

Fun fact: Eastside’s only district loss this season was to North Marion.

The championship game between Eastside and North Marion will be @ North Marion on Friday, February 16. Tipoff is set for 7 p.m.

Recent grad from the University of Florida. Editing all articles on here while helping out the newbies. Love all things basketball.
@@MarcoJMartinez_
Previous Gators Look to Avenge Recent Loss Against Georgia
Next Winter Olympics Update 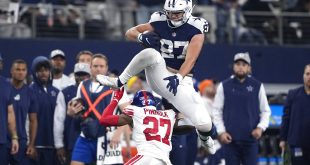