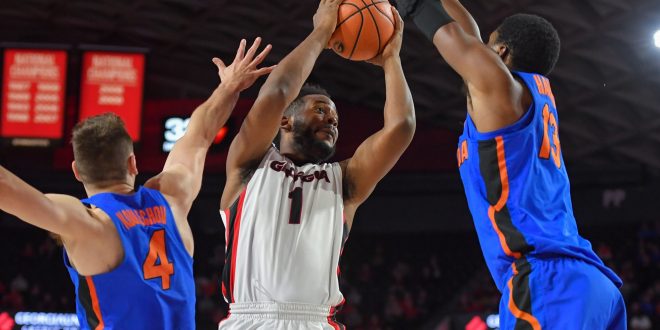 The Florida Gators look to win their third straight SEC games as they host the Georgia Bulldogs on Wednesday night. The Bulldogs have really struggled lately, losing three in a row and six of their last seven. The one win in that span was on the road against Florida, so the Gators will be looking to repay the favor in Athens.

With limited talent on the roster, the Bulldogs have struggled to stay competitive in the SEC. Outside of Yante Maten, Georgia does not have another legitimate scoring threat. They average 68.4 points per game, which is the least in the conference. They’re also shooting 42.8% from the field and 31.8% from three, which are both the 2nd worst in the SEC.

According to Kenpom.com, the Bulldogs rank 13th in the SEC with an offensive efficiency of 98.9. They also have an effective field goal percentage of 46.0% and a two-point percentage of 45.7%, both of which are the second worst in the conference. Overall, Georgia offensive struggles have significantly hindered their ability to win.

Maten it to the NBA

Yante Maten is the team’s lone bright spot. The NBA-bound senior is arguably the best player in the conference. He is averaging an SEC-leading 19.4 points, 8.7 rebounds, 1.7 assists, and 1.3 blocks per game. Maten has the third ranked offensive rating in the country at 117.8. He ranks behind Jock Landale of Saint Mary’s and Keenan Evans of Texas Tech, both of whom are Player of the Year candidates. He was recently named a Karl Malone Award Finalist, which recognizes the top power forwards in the nation. The former 3-star recruit has improved significantly each year during his tenure at Georgia.

Florida had arguably their best performance of the season on Saturday afternoon with a 65-41 victory over South Carolina. It was a legitimate team effort, with six different players scoring more than six points. They need to have this same type of team effort against Georgia, specifically on the glass. In their last meeting, the Bulldogs out-rebounded the Gators 44-35, including grabbing 15 offensive rebounds.

While shooting woes plagued the Gators in their first matchup with Georgia, they need to come up with a better defensive game plan. Yante Maten and William Jackson II shredded the Gator defense, combining for 36 points on 11-24 shooting. They focused too much attention on shutting down Maten, which opened up ample opportunities for Jackson and Juwan Parker to make plays.

The game is being aired on SEC Network with Mike Morgan and Pat Bradley. It can also be streamed on Watch ESPN. Additionally, the game will be on the radio via Gator IMG Sports Network with Mick Hubert and Bill Koss.