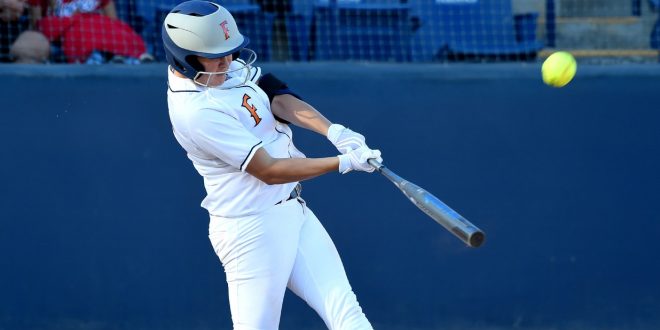 Softball season is back. The Gators showed why they were ranked second in the nation over the weekend with dominant play from the entire roster.

The Florida Gators’ softball team kicked off their season last weekend at the USF-Wilson Demarini Tournament in Tampa. Facing top talent like then-No. 15 Michigan, Florida played like they belonged. Going 5-0 with an average margin of almost eight runs and not allowing a single run until the final game Sunday against USF.

The Gators play their first home game of the season Wednesday against the North Florida Ospreys. First pitch is 6 p.m.

It is hard to pick out one single reason why the Gators (5-0) dominated over the weekend. From the pitching and defense to the bats coming from seemingly the entire team.

Senior utility player Aleshia Ocasio — who had an outstanding weekend —  hopes that this momentum will carry into the coming games. Ocasio hit a .333 batting percentage and scored five times, while also winning all three of games she pitched in from the circle with a 1.50 ERA.

Junior Amanda Lorenz also stood out during the weekend tournament. Hitting seven of her 14 at-bats, Lorenz had five RBIs and three doubles. Lorenz also showed tremendous plate vision as she drew four walks over the weekend, tied for the team-high with senior Nicole DeWitt.

Lorenz credited her early success at the plate with her off-season work.

Florida’s young core also had an opportunity to show what they could do. Second-baseman Hannah Adams exhibited why she earned her starting role as she hit .278 at the plate and had no errors.

Other freshmen like Jordan Matthews and Natalie Lugo also made the most of their opportunities. Matthews went 6-for-13 at the plate with two home runs and a team-leading 10 RBIs. Lugo saw six batters in her two innings-pitched without allowing a hit as she came in relief against Georgia State on Saturday.

Even with a lot of underclassmen contributing early, head coach Tim Walton said that this does not guarantee consistent playing time in the future.

With a lot of talent — and a lot of experience — on the team, these freshmen may need to learn from the team’s veterans before it is their turn.

This Gator softball team will play its first game in the Katie Seashole Pressly Stadium for the first time. They play a North Florida (2-3) team with good all-around play.

The Ospreys are led by junior utility player Navia Penrod. Penrod played in 58 games last year while hitting .422 at the plate. Penrod started the strong with a team-high ten hits and four RBIs.

Walton says that he is excited for this season opener, but knows that it comes with its own added pressure.

North Florida pitchers Morgan Blourne and Sydney Matzko will be looking to add to that pressure. The pitching duo split pitching duties over the weekend with Matzo starting three of the games and Blourne starting the other two.

The two pitchers had a good weekend with not a lot of offense to back them up. In their three losses, the team combined for four total runs while Matzo and Blourne allowed only nine runs on a 1.9 average ERA.

Tim Walton said earlier in the week that he expects to hit some speed bumps throughout the season, but he knows that the strong leadership from his returning players will be the key.