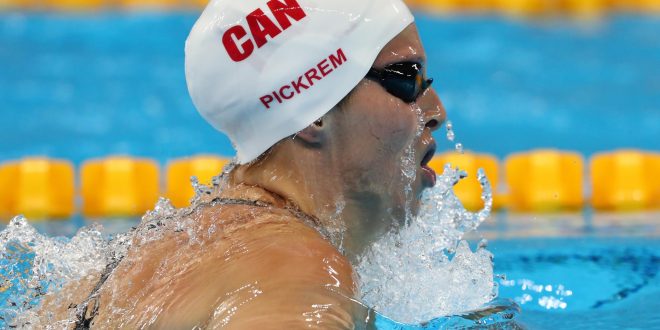 The Texas A&M women and the Florida men lead the 2018 SEC Swimming and Diving Championships following the second day of competition. For the men, Florida comes in first with 432 points, while Tennessee is the runner-up at 411 points, and Texas A&M third at 409 points. As for the women, Texas A&M exceeds their competition with 469 points, while Georgia holds second having 361, and Tennessee sitting in third with 337.5 points.

For the women’s 500 freestyle, Geena Freriks of Kentucky finished off strong having touched the wall in the time of 4:37.20. Georgia’s freshman Courtney Harnish came in second at 4:38.21, one second ahead of the third place holder Claire Rasmus of Texas A&M with time of 4:39.23.

While at first she fell behind Tennessee’s Meghan Small and Kentucky’s Asia Seidt, Sydney Pickrem of Texas A&M crept up and took over the 200 IM finishing first in 1:52.69.

Florida’s senior Caeleb Dressel set the US Open, NCAA and American records for the men’s 200 IM recording a time of 1:38.13. Hugo Gonzalez of Auburn followed, just short of 2.5 seconds from Dressel coming in second with time of 1:40.67.

Four more medals, a new American record & both teams moving up in the standings!

Check out what you missed during tonight's finals session! https://t.co/5up5qWJUhE#GoGators

First place for the women’s 50 free went to Erika Brown of Tennessee, touching in 21.39 seconds. Not far off was Auburn’s Alyssa Tetzloff finishing in 21.94. Alabama’s Bailey Scott finished third in .02 seconds after Tetzloff.

For his first individual SEC title ever, Auburn junior Zach Apple touched the wall in 19.08 for the men’s free. Tennessee’s Kyle Decoursey took second in 19.12 while Robert Howard of Alabama came in third finishing at 19.14.

Tennessee’s women’s team consisting of Madeline Banic, Erika Brown, Bailey Grinter, and Stanzi Moseley won their second straight sprint relay. They finished with a time of 1:27.26. On the men’s side, Alabama’s quartet of Robert Howard, Zane Waddell, Braxton Young and Laurent Bams took home the gold. They finished with a 1:16.38.