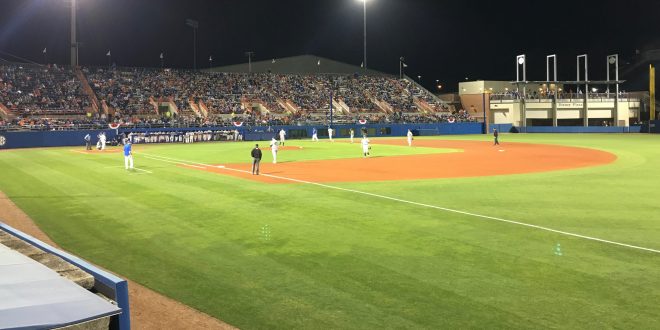 The defending baseball national champion Florida Gators came away with a season-opening 7-1 win over Siena on Friday night in Gainesville.   Before the game, fans and players celebrated Florida’s 2017 national championship and the championship flag and banner were unfurled before the start of this season’s opener.  The first 500 fans received a mini championship trophy replica which helped bring in the fifth largest crowd at Alfred A. McKethan Stadium with 5,270 fans to see an opening game. Former Gator pitcher Alex Faedo, now with the Detroit Tigers after helping Florida win the title a year ago, threw out the honorary first pitch.

When the first game of this season began, junior Brady Singer took the mound for the Gators. He recorded the first out of the 2018 season, with a grounder that was hit right back to the mound. Singer picked up the win, pitching seven solid innings while giving up an unearned run and two hits and striking out eight.   He only allowed one walk as well.

To start the eighth inning, Singer was relieved by freshman lefty Jordan Butler, who struck out the side in the eighth and finished his night with four strikeouts while allowing 0 hits and walking two.

Starting pitcher for Siena was Brendan White, and through six innings he gave up seven hits and three runs while fanning six.

Florida broke into the scoring column in the fourth inning when Jonathan India hit a solo home run.  JJ Schwarz and Nelson Maldonado both hits singles afterward but they were left stranded and the Gators settled for just the one run.

Siena tied the game with a run in the sixth but in the bottom of the inning, Schwarz hit a double and advanced to third as Maldanado flied out.  Wil Dalton, making his Gator debut, singled with two out to plate Schwarz.  Blake Reese then doubled to plate Dalton putting Florida up 3-1.

In the bottom of the 7th, Horvath led off with a double and with two outs and Schwarz up, Siena elected to intentionally walk the Gator catcher but the strategy backfired as Maldonado doubled home to runs to make it 5-1 Gators.  Florida tacked on two more runs in the eighth thanks to a two-run homer by freshman shortstop Brady McConnell who had struck out in his three previous at-bats.

The Gators had 11 hits on the night with four hitters having two hits each, including Horvath at the bottom of the lineup and Gator coach Kevin O’Sullivan says it’s nice to have an experienced senior to help the bottom of the order.

McConnell, the freshman shortstop, says he was anxious to get on the field to start his Gator career.

O’Sullivan added that most freshman will experience ups and downs in their first seasons.

The Gators will face Siena again tomorrow at 4 p.m. and on Sunday at 1 p.m. You can listen to live coverage of the games on ESPN Gainesville 98.1 FM/850 AM.