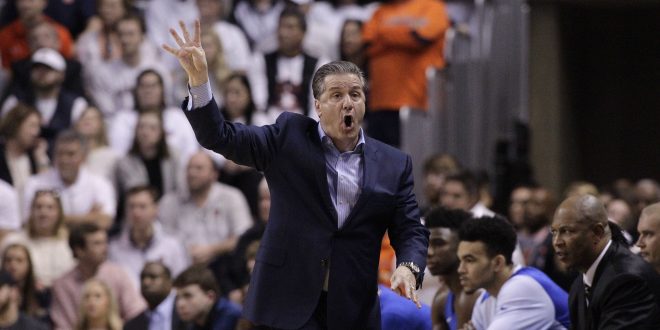 The Kentucky Wildcats are experiencing a stretch unknown to those involved with the program. John Calipari’s team are currently on a four-game losing streak. The skid has forced Kentucky’s slide down the SEC standings. They are now in the middle of the pack in the conference. Kentucky now has a severely damaged resume for the NCAA Tournament, which is just about a month away. The Wildcats have a chance to get a much-needed win when they host the Alabama Crimson Tide Saturday.

The Wildcats are on their first four-game losing streak since Kentucky hired Calipari in 2009. Since Calipari’s hire, Kentucky is notorious for having one of the youngest teams in the country. Year after year, the Wildcats have a new starting five. Kentucky normally starts the season off slow but normally pick up their play just in time to peak before the tournament. This year, the Wildcats haven’t been on schedule.

The inexperience for Kentucky showed in its last outing against Auburn. In the loss to No. 10 Auburn, the Wildcats registered 21 personal fouls that led to the Tigers taking 28 trips to the foul line. Auburn went 24-28 (85.7%) from the charity stripe. The frequent trips to the line proved to be the difference as the Tigers won convincingly 76-66 Wednesday night.

With the recent struggles, this edition of Kentucky basketball doesn’t bring the same fear in opponents as in years past. They have become an extremely inconsistent basketball team that desperately needs a strong end to the season to improve their stock come tournament time.

Head coach Avery Johnson has his Alabama Crimson Tide flying under the radar heading into the final stretch of the season. The team’s offensive efficiency has improved to a point where it’s difficult for teams to stop the Tide from rolling. In three of Alabama’s last four outings, the Tide offense has been over 50% in field goal percentage. This surpasses the season average of 46.9%.

In Alabama’s dominating 80-65 win over LSU Tuesday night, Alabama continued its offensive efficiency by shooting 55.1% from the field. This dominant performance included a 24-3 run. Forward Dante Hall led the team with 20 points on 8-10 shooting. Most of his opportunities came from in close.

Alabama is showing they have the capability to be a dangerous tournament team. That was shown in the beatdown they gave then No. 15 Tennessee last week. That win really turned some heads around the conference.