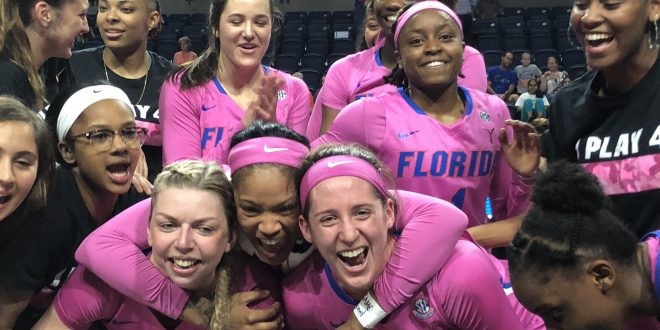 Seniors Haley Lorenzen, Paulina Hersler and Dee Anderson truly made it the senior’s day on Senior Day for Gator women’s basketball as the three combined for 50 points in the Gators win in dominating fashion over Vanderbilt 88-71 Sunday afternoon.

The Gators led the entire game thanks to an efficient inside-out offensive attack. The win snaps a six-game losing skid and gives the seniors a day they won’t soon forget.

Before the game, a video tribute to each senior played on the jumbotron. Then, each senior was presented with their black jersey framed. Once the game started, the three active seniors showed their appreciation. They did so by making a major impact on the game against Vanderbilt. Lorenzen, Anderson and Hersler combined to score the first 9 points. From there on, the Gators never looked back.

Lorenzen finished the game with another double-double of 18 points and 11 rebounds. Hersler totaled 16 points and 7 rebounds. Anderson finished with 16 points as well and added 2 rebounds and 2 assists. The seniors scored 50 points combined.

Gators head coach Cam Newbauer said it was appropriate that the seniors made such a major impact on Sunday’s blowout win.

The three active seniors were pulled late in the fourth quarter and received a standing ovation from the Gator fans. The entire senior class addressed the fans following the game thanking them for all their support through the tough times.

Senior forward Haley Lorenzen said how much she appreciated the fan support and getting the win on Senior Day.

The Gators utilized an inside-out attack to dominate Sunday afternoon’s game against Vanderbilt. As expected, the Gators came out shooting the three-ball to start the game. They were hitting early, which has proven to be a good sign for this team. Florida shot 57.1% (4-7) from deep in the first quarter. Anderson and Hersler each hit one before junior guard Funda Nakkasoglu hit two on back-to-back possessions.

In the second quarter, the three-point shots slowed down. This prompted Florida to attack the paint. The Gators used the pick and roll effectively to either get the ball to the forwards or allow the guards to take open jumpers. Florida shot 67% percent (8-12) from inside the three-point line for the quarter. This inside-outside attack in the first half gave Florida a 43-30 lead at the half.

As the saying goes, “If it ain’t broke, don’t fix it.” That was the Gators approach in the second half. In the third, the distribution between the inside game and the three-point shot was about even. This offensive game plan allowed Florida to grow its lead to as high as 26 early in the fourth quarter. The Gators finished the game shooting over 50% from the field and knocked down 12 three-pointers. This was the 11th time this season Florida hit double-digit threes.

Lorenzen said that the success shooting the ball early on opened up the inside for her.

The Gators dominance inside could also be seen in the rebounding department. Florida outrebounded Vanderbilt 48-29 for the game. This is tied for the largest rebounding margin in an SEC game this season.

Nakkasoglu led this offensive attack with a stellar showing from beyond the arc. With the Vanderbilt defenders starting to fall back to protect the paint, Nakkasoglu made the Commodores pay. She led all scorers with 25 points. Most of these points came from three-point land. Seven out of the eight field goals Nakkasoglu hit Sunday afternoon were from three. She went 7-13 from three for the game. This is the fourth game in a row where Nakkasoglu led the team in scoring.

Along with her teammates and coaches, she said that the offensive gameplan allowed her to have another strong performance Sunday.

When Florida sophomore guard Delicia Washington initially went down Thursday night against Texas A&M, her status for the rest of the season looked uncertain. She suffered her first sprained ankle coming down from a jumper in the third and was on the ground for a few minutes. Heading into Sunday’s game, Washington’s status became more and more up in the air. Newbauer said postgame that the team didn’t decide to start Washington until 2o minutes before the game after consulting the rest of the starters and Washington.

While wearing a brace on left ankle, Washington was close to a triple-double performance. She finished the game with nine points, nine rebounds, and eight assists. She even had some highlight-worthy passes. One was a rocket pass to Anderson for a transition layup to extend Florida’s lead to 14 in the third. Then another one was a three quarters court pass to Hersler all alone in transition for an easy layup to give Florida the 74-52 edge in the fourth quarter.

Newbauer said Washington’s maturity helped her overcome the injury and put together a strong performance.

Sunday’s win ended a six-game losing skid for the Gators. After coming so close against some of the best teams in the country, the Gators secured a win running away. A dominating win with a near perfect on-court performance will surely bring confidence to this team. However, six games prior to Sunday already gave them the confidence. That confidence was on full display Sunday afternoon. During the losing streak, the players and coaches took positives out of those tight losses to some of the best teams in the country.

Lorenzen said that those close losses proved many of the team’s doubters wrong.

Newbauer said that the team’s record doesn’t show how good the team actually is.

Sunday may have been Senior Day, but the seniors still have one game remaining inside Exactech Arena. They host No. 11 Tennessee Thursday night. Tip-off is set for 7 p.m.