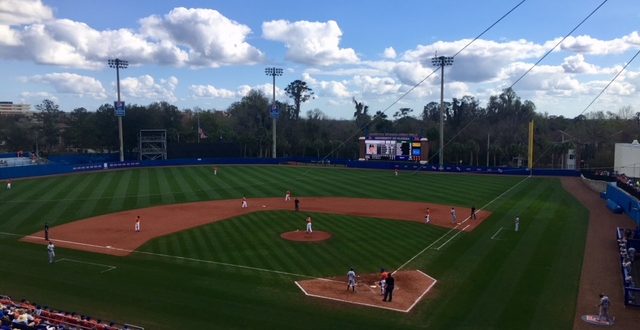 Gators Too Much for Siena in Series Finale

The Gators were on fire offensively the first two nights of the season and it carried over to Sunday.

Florida collected 18 hits en route to a 19-2 win over the Siena Saints. Starting pitcher Tyler Dyson was also solid in his performance giving up one run on five.

The Gators wasted no time getting the scoring started as they scored three runs in the first inning. Kenan Bell hit a bases-loaded double to give Florida an early 3-0 advantage.

In the second inning, Jonathan India hit a sac-fly to center field to extend the lead to 4-0.

UF would score another three runs in the fifth before putting the Saints to bed in the sixth. The Gators scored nine runs on six hits in the inning to give them a 16-1 lead.

Florida was not done yet as they scored another three runs in the eighth inning, giving them 19 runs on the afternoon.

One of the main contributors to the Gators great day offensively was Kenan Bell.

The Sophomore went 2 for 3 with four runs batted in and a home run. Bell also walked and scored twice.

Kevin O’Sullivan attributes Bells success to his hard work and believes he is a legitimate power bat in the middle of the order.

Even though Tyler Dyson had a quality start on Sunday afternoon, O’Sullivan thought that the Sophomore seemed a little bit off.

Dyson said that it is helpful having Brady Singer and Jackson Kowar ahead of him in the rotation because it alleviates the pressure for him on Sundays.

Keenan Bell said that he always knew he had power, it was all about getting more consistent. He credits his improvement from last season to the adjustments he made during summer ball.

The Gators are now sitting pretty at 3-0 on the season after achieving the series sweep on Sunday. Florida scored 36 total runs on the weekend.

They will now prepare for a pair of mid-week match-ups against FAU and Bethune Cookman. First pitch against the Owls will be at 6 p.m. at McKethan Stadium. The ballgame will be televised live on SEC Network+ and live radio broadcast can be heard on ESPN 98.1 FM/850 AM WRUF.

We'll be back at the Mac on Tuesday night to face FAU at 6 p.m. pic.twitter.com/4xmaeK26z9