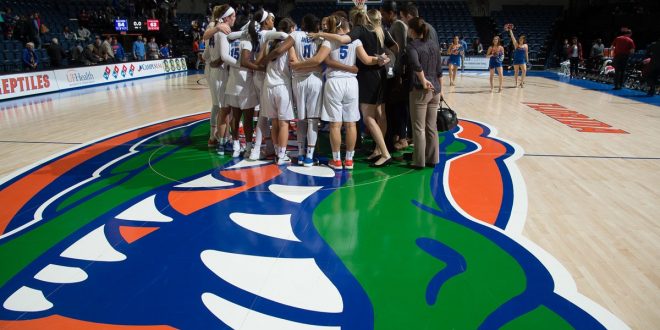 Sunday the Florida Gator women’s basketball team will honor four seniors for their contribution to the program. Seniors Haley Lorenzen, Dee Anderson, Paulina Hersler and Gabby Seiler have laid the foundation for first year Gator head coach Cam Newbauer to build on. They were able to do so through their leadership, hard work and dedication. These four seniors will be honored 15 minutes prior to tip-off when the Gators host Vanderbilt Sunday afternoon.

Lorenzen’s Impact On and Off the Floor

For Florida senior forward Haley Lorenzen, this season, her final season, won’t be one she or anyone associated with Gator women’s basketball won’t soon forget. Lorenzen made her mark in the history books several times this season. She became the 25th player in program history to score 1,000 career points in the team’s win against Delaware State back in December. Lorenzen started her 100th game for the Gators in Thursday’s loss to Texas A&M, becoming the 10th Florida player to do so. She was even awarded her first SEC Player of the Week honor back in January.

The award came after Lorenzen posted a double-double against Arkansas in the team’s first SEC win of the season. Then, she had the game-winning putback and game-sealing block in a thrilling, come-from-behind victory over Ole Miss that Sunday.

Through all the accolades Lorenzen has won this season, she has kept the focus not on her, but on her team and teammates. Lorenzen, like other seniors, had to become leaders. She did so by encouraging her teammates and just being a positive presence in the program.

Florida senior guard Dee Anderson has really come into her own this season. She, along with other members of the team, had to work on her game to fit into Newbauer’s 3-point heavy offense. All of her hard work paid off in a dominating victory against Oklahoma back in December where she led the team with a career-high 29 points that included going 6 of 7 from 3-point land.

Anderson also had to become a leader for this team being a senior, especially for a young group of guards; her development into a vocal leader for this team has allowed her to look into becoming a coach. She first got the coaching bug over the summer when she was coaching youth basketball. That teaching of the game and a greater knowledge about the game translated in her becoming a leader. Anderson was selected to participate in the So You Want To Be A Coach? program this summer, hosted by the Women’s Basketball Coaches Association.

Newbauer said Anderson’s confidence helped her both on and off the court.

When forward Paulina Hersler stepped on foot on campus, not much was known about her. Hersler saw limited minutes when she was at UCLA. She worked her way into the starting rotation, bringing experience to the frontcourt that the team desperately needed.

Over the course of the season, Herlser’s game has steadily improved. She has become one of the more reliable scorers on this team. In several games this season, Hersler tied her career high with 19 points. One of those times helped Florida capture its first SEC win of the season against Arkansas. A major reason for Hersler’s growth on the court has been her development with the 3-point shot. She has made more threes this season than her last three seasons with UCLA. Hersler was also a force on the boards as she pulled down more rebounds this season than her entire career combined. Hersler was a welcomed presence for this team both on and off the court.

Newbauer said that Hersler’s work ethic this past season has allowed her to grow into the player she is today.

When Gabby Seiler joined the team in December, her role was unclear. She just came off a very successful soccer season and hasn’t played basketball since high school. Seiler joined the team after her soccer coach Becky Burleigh reached out to Newbauer. The expectation for Seiler was to give Florida depth numbers. She was also tasked with bringing the championship culture from Gator soccer and instill that for Gator women’s basketball. Seiler didn’t see the court for the Gators. She had a nagging injury from the soccer season with her leg that required surgery. She was still able to be around the team and be a positive force for her teammates and will be honored for that on Sunday.

This group of seniors has dealt with a lot during their time at Florida. A coaching change, not much success in terms of wins and just having to adjust to different roles in their final season. However, they did show the young group of Gator players how its done both on and off the court.

Newbauer said that this senior class laid the foundation for this program moving forward.

The Gators hope to end a six-game losing streak on Senior Day when they host Vanderbilt at 1 pm Sunday.