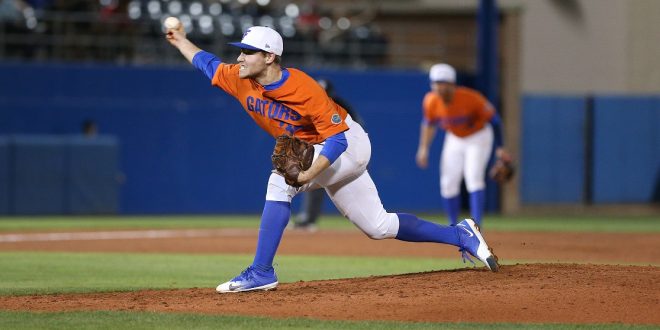 Nick Long fires home a pitch during the Gators' game against the Bethune-Cookman Wildcats on Wednesday, February 21, 2018 at McKethan Stadium in Gainesville, Fla. / UAA Communications photo by Allison Curry

The Gators remained undefeated with a 7-4 win over the Bethune-Cookman Wildcats. Head coach Kevin O’Sullivan mixed and matched his bullpen arms to piece together Florida’s fifth consecutive victory.

Jordan Butler struggled a bit in his debut as a starter. The freshman lefty had to battle out of second and third inning jams, but he escaped without a scratch. He failed to dodge damage for long, however. Bethune-Cookman struck for three runs in the top of the fourth forcing head coach Kevin O’Sullivan to turn to sophomore RHP Nick Long in relief.

Long was solid and picked up the first win of his Gator career. He pitched 2.1 innings of scoreless work. From Nick to Nick, O’Sullivan then handed the ball to Nick Horvath in the top of the sixth, who was looking to redeem himself after giving up a run in his first appearance on Sunday. He faced only three batters and retired two.

Flame-throwing freshman Hunter McMullen entered in the top of the seventh after Horvath walked the first Wildcat hitter. He needed just four pitches to induce a 4-6-3 double play and a fly out to retire the side. McMullen gave up just one hit over his two innings of work. Freshman Connor Churchill gave up a run in the ninth, but closer Michael Byrne came in and closed the door on Bethune-Cookman’s final opportunity at the plate.

O’Sullivan was pleased with the performances he saw out of the bullpen tonight.

Florida again got to their opponent early to provide Butler with some early run support. Wil Dalton opened up the scoring with an RBI single in the first to plate Jonathan India. He now has a team-high 9 RBI on the season.

Florida would add three runs in the bottom of the fourth. Two of them came by way of a homer from J.J. Schwarz, his second of the year. Wil Dalton then scored on a balk to make the score 4-0. Bethune-Cookman starter Tyler Krull, who pitched well against Florida in the final game last year’s NCAA regional, took the loss.

Schwarz would score to get a run back in the fifth as Dalton reached on a throwing error. After 5 innings, the Gators led by a score of 5-3. Florida broke the game open in the seventh. Dalton walked home a run and Keenan Bell singled home another to extend the Florida lead to 7-3.

Offensively, O’Sullivan said his team received key contributions from players that are expected to hit well.

HOME RUN number two of the season for JJ Schwarz! Two-run shot to the opposite field off the scoreboard. #UseTheSchwarz

The Gators will hit the road for the first time this season as they head to Coral Gables to take on the Miami Hurricanes in a three-game weekend series.

That's the ball game! #GatorsWin 7-4 to improve to 5-0 on the year. #FeelTheByrne with his first save of the season.

Next up: #Gators travel to Miami for a 3-game series starting Friday night pic.twitter.com/iyMPJRaj2u

I'm an above-average golfer with surprisingly great touch around the greens. Click on my twitter link for some sports talk.
@Ry_McGinn
Previous Marcell Harris: Path to the draft
Next Volunteers Hold Off Late Run by Gators to Secure Big SEC Win