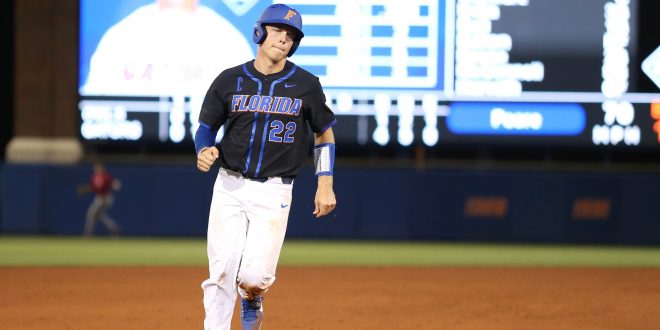 The Gators(6-0) battled back from an early deficit on Friday night to defeat Miami(2-3) by a score of 7-3. Nick Horvath contributed a career-high 4 RBI to help give Brady Singer his second win of the season.

The Hurricanes hitters came ready to play and jumped on Singer early in the first. After a base hit to lead off the game from Michael Burns, Michael Perez hit a two-run home run to give Miami an early advantage. Michael Admitis capped the rally with an RBI single to drive home freshman Danny Reyes giving Miami a 3-0 lead.

Singer managed to finish five innings, despite the shaky start.  In total, he surrendered nine hits, five of which came in the first inning.

Gators Had Brady’s Back

Florida responded quickly with run support for their ace. In the second inning, Horvath blasted a two-run homer into a palm tree over the wall in left field to cut the deficit to 3-2.

The Gators then took the lead in the fourth. Again, it was Horvath who stepped up. He doubled down the left field line to score Keenan Bell and Blake Reese. Bell went 3-for-4 with two runs scored in tonight’s win.

Schwarz kept the offense rolling with a solo home run to left field off of a light pole in the fifth. The homer is his team-high third on the season. The bomb put the Gators up 4-3

After Singer recovered nicely to finish his night, head coach Kevin O’Sullivan turned to freshman RHP Tommy Mace. He was lights out.

Mace made retiring Miami hitters look easy. He picked up his first career save after tossing four scoreless innings. Mace didn’t give up a single hit. His sole blemish was a walk issued in the bottom of the ninth.

Blake Reese added a couple of insurance runs in the eighth inning with a two-run double to extend the Florida lead to 7-3, the eventual final score. The double was Reese’s fifth of the season and he’s now hitting .409 on the year.

Freshman Tommy Mace was a stud out of the pen, 4.0 shutout innings with NO hits allowed to earn his first career save. #TommyBoy pic.twitter.com/uP4WlZH9RA

Freshman shortstop Brady McConnell continues to struggle early. He’s 3-for-20 to begin the season. He committed two errors on Friday bringing his season total to three.

Austin Langworthy is also looking to work his way out of an early-season slump at the plate. He’s 3-for-22 to begin 2018 with an on-base percentage of .269.

Jackson Kowar will get the start on Saturday as Florida will be back in action for the second game of the three-game series against Miami at 7 p.m.

I'm an above-average golfer with surprisingly great touch around the greens. Click on my twitter link for some sports talk.
@Ry_McGinn
Previous Auburn Having Breakout Men Hoop’s Season
Next Florida Eyes Key Victory in Home Showdown with No. 12 Auburn