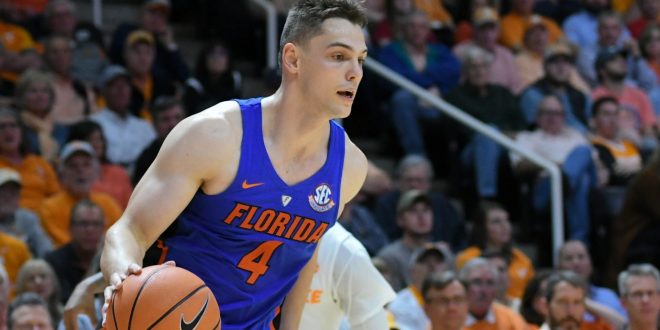 Florida Eyes Key Victory in Home Showdown with No. 12 Auburn

The Florida Gators are set to square off with the No. 12 Auburn Tigers on Saturday night at 8:30 p.m. in Gainesville for the first and only time this season. The Tigers more than likely represent the Gators’ last chance to secure a Top 10 RPI win this year. While all of Florida’s final three games offer opportunities at Quadrant I victories, Saturday’s showdown with Auburn could be the win that locks up an NCAA Tournament bid for the Gators. Florida-Auburn can be seen on the SEC Network or WatchESPN app with Dave Neal and Jon Sundvold on the call.

Mike White said after the Tennessee loss was the most disappointed the team has been this season. Said he wished that moment came 4 months ago, but he'll take it now as motivation moving forward.

Nobody, including myself, expected the Auburn Tigers to be very good this season. AU was projected to finish 9th in the SEC Pre-Season Media Poll sandwiched in between Georgia and Ole Miss. On top of poor expectations, it was announced before the season that two of Auburn’s most talented players, Austin Wiley and Danjel Purifoy, were declared ineligible for the 2017-2018 season due to the ongoing FBI probe regarding NCAA recruiting violations.

Despite all of these factors, the Tigers are currently No. 1 in the SEC standings with a 24-4 record. Auburn is ranked in the top 35 nationally in both offensive and defensive efficiency and are hitting three-pointers at a 37.7% clip on the season. AU is averaging 84.9 points per game, which ranks 8th in the NCAA, and has four players averaging double-digit scoring (Bryce Brown, Mustapha Heron, Jared Harper, Desean Murray). Eight of Auburn’s top nine scorers are shooting 41% or better from the floor, while six of their top seven scorers are shooting 34% or better from beyond the arc. On top of the Tigers’ offensive success, the team plays at an extremely quick tempo. Auburn averages 72.5 possessions per 40 minutes, which ranks 21st in the nation and 1st in the conference.

Since Mustapha Heron, Auburn’s second-leading scorer, is questionable for Saturday night’s game with the stomach flu, we’ll be previewing three of the Tigers’ other core pieces. First up is Bryce Brown, Auburn’s most electric scorer. The junior is averaging a team-leading and career-high 16.4 points per game on 41% shooting from the field. He’s also making 39.3% of his shots from long-range. At 6’3″, 198 pounds, Brown has the ability to score inside and out. The junior guard has scored at least 18 points in 11 of Auburn’s 28 games this season, including two of their last three.

Next up is Jared Harper, the Tigers’ X-Factor. Harper stands at a small 5’10”, 170 pounds but is extremely dynamic with the rock. Harper is averaging a team-leading 5.8 assists per contest and 13.8 points per game. In Auburn’s last six games, Harper has notched 17.2 PPG, 7.2 APG and 2.0 SPG on 38.2% shooting from long-range. The sophomore has scored 13 points or less in all four of Auburn’s losses this season.

Last but not least is Chuma Okeke, Auburn’s 6’8″, 230 pound freshman forward. Okeke is only averaging 7.9 points and 5.3 rebounds per game, but has been very efficient for the Tigers this season. He’s shooting 47.9% from the floor and 42.6% from downtown. In Auburn’s last two games, Okeke is averaging 13.5 points, 9.5 rebounds and 2 steals on 50% shooting from the field.

It’s no secret that Florida has struggled as of late. The Gators have lost their last three games to Georgia, Vanderbilt and No. 19 Tennessee and have looked ugly in doing so. During that span, UF is 32-54 (59.3%) at the free throw line and have missed 23 of their 48 attempted layups. In those losses to UGA, Vandy and UT, Florida is scoring 64.7 PPG, while allowing 68.3 PPG, and shooting 38.7% from the field. During the Georgia and Vanderbilt games, the Gators blew double-digit, second half leads en route to defeat.

While the last three losses have been disheartening and discouraging, Florida must have short-term amnesia and focus on their final three games. All are Quadrant I win opportunities against teams in the top half of the league and represent chances to shore up their NCAA Tournament chances. According to Joe Lunardi’s latest Bracketology, Florida is currently a No. 7 seed with a projected match-up vs. Kansas State in Detroit in the Midwest region. While the Gators have not looked great as of late, their resume has them firmly in the NCAA Tournament as of today.

Florida is 32-54 at the foul line over their past three games and have missed 23 of their 48 attempted layups over that span. Here's what Mike White had to say about it. pic.twitter.com/6MsRbDg0o1

John Egbunu (knee), Isaiah Stokes (knee) and Chase Johnson (concussion) are all out as usual. For Auburn, Mustapha Heron is questionable with the stomach flu. He missed the Tigers’ last game vs. Alabama. The team’s leading shot-blocker, Anfernee McLemore, is out for the season with a fractured tibia and dislocated ankle suffered on February 17 vs. South Carolina. Austin Wiley and Danjel Purifoy remain ineligible.

Wednesday night’s game tips-off at 8:30 p.m. at Exactech Arena and can be seen on the SEC Network or WatchESPN app. You can listen to the game on the Gator IMG Sports Network or Sirius 138/XM 191.