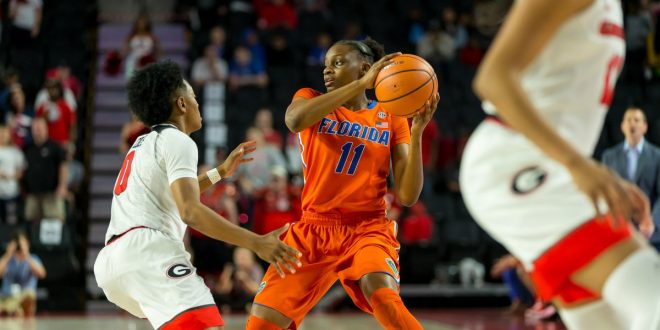 Sunday was a rough end to the regular season for Florida Gator women’s basketball. The Gators were only in the game for its very early stages. Florida’s inability to slow down the transition game for Georgia proved to be the difference. The Gators end the regular season with a crushing 63-43 loss to 19th ranked Georgia in Athens.  Now, the Gators head to Nashville for the SEC Tournament not knowing the official status of one of its senior captains.

From the opening tip, the Gators played as expected. They were competitive with Georgia from the very beginning. Florida senior guard Dee Anderson gave the Gators the first lead of the game with a corner 3. The Gators were able to take advantage of a slow shooting start for the Bulldogs to take the early lead. Even with the slow start, the Bulldogs hung around early. Then, the Bulldogs, unexpectedly, started hitting three-pointers. Georgia rode this unexpected development to a convincing win.

Florida had no answers on either side of the ball. The Gators had an extremely difficult time getting back on defense while Georgia was coming full steam ahead in transition. Georgia had 12 fast break points while Florida had zero. The Georgia defense shut Florida down in the second half, only allowing nine points in the third quarter and eight in the fourth. The Florida shooters just didn’t make shots and things got out of hand.

The Florida defense was focused on preventing Georgia from getting shots in the paint. They begged the Bulldog shooters to hit from beyond the arc. This game plan wasn’t as successful as Florida first thought. The Georgia shooters were hitting from three-point land for most of Sunday afternoon’s win. They did most of their damage in the second quarter, hitting 4 of- from deep and the Bulldogs finished the game with eight 3-pointers for the game. The last one came from Georgia freshman guard Gabby Connally at the end of the third quarter, beating the buzzer and essentially sealing the win for the Bulldogs. Georgia led 52-35 at the end of the quarter.

The Gators meanwhile hit just six 3 point shots for the game.  The Gators adjusted by trying to take it inside because the 3-point shot wasn’t going their way.

One Starter Returns, Another Goes Down

Florida welcomed sophomore guard Delicia Washington back to the starting lineup Sunday afternoon. She missed Thursday’s loss to Tennessee in the home finale due to an ankle injury she suffered two games prior. In her return, Washington totaled eight points, eight rebounds and one assist. She was able to play her usual high energy game with no real issue with that left ankle. She did limp towards the sideline after colliding with a Georgia defender in transition. However, she was fine and finished the game.

Perhaps the scariest moment of the game came in the fourth quarter. Florida senior forward Haley Lorenzen came down awkwardly and appeared to mess up her right leg. She couldn’t put pressure on it when she was helped off the floor by Newbauer and a member of the training staff. She was tended to on the bench and didn’t return to the game. Lorenzen used crutches to get through the post-game handshake line and her status for the SEC Tournament this weekend remains unknown.

The Gators head straight to Nashville from Athens for the SEC Women’s Basketball Tournament. With Vanderbilt’s win over Arkansas, the Gators secured the 11 seed in the tournament. They will face the 14 seed Ole Miss Wednesday with tip off scheduled for approximately 2:25 p.m. The game will start 30 minutes following the conclusion of the rematch between Vanderbilt and Arkansas at noon.