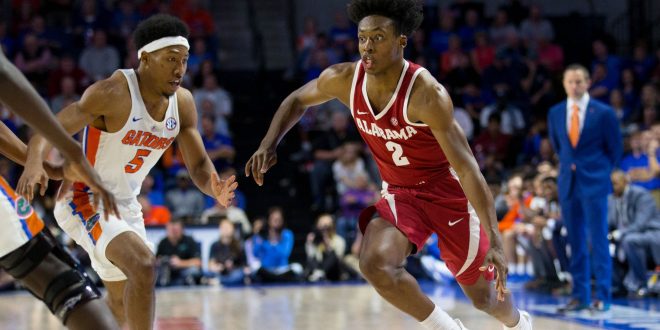 Florida Ripe for Revenge in Rematch With Alabama

Ripe off of their best conference win of the season, the Florida Gators are headed to Tuscaloosa to take on the Alabama Crimson Tide at 7 p.m. on Tuesday night. Alabama won the first meeting between the two teams, 68-50, and were dominant on the inside. The Tide outrebounded the Gators, 43-25, and outscored them in the paint, 46-26.

UF and Bama are 6th and 8th in the SEC standings, but both teams have struggled as of late. While Florida won their most recent game vs. No. 14 Auburn, the Gators dropped three straight games before that to Georgia, Vanderbilt and No. 16 Tennessee. The Crimson Tide are on a three-game losing streak of their own, having dropped consecutive contests to Kentucky, Auburn and Arkansas. Tuesday night’s game can be seen on ESPN with Joe Tessitore, Sean Farnham and Laura Rutledge on the call. You can listen to the game on the Gator IMG Sports Network with Kyle Crooks and Mark Wise, or nationally on ESPN Radio with Bill Rosinski and Bob Valvano.

Strong, stiff defense has been Alabama’s identity all season and a big part of why they’ve had some success. The Crimson Tide rank 10th in the nation in defensive efficiency and 1st in the SEC. Alabama is also ranked in the top 40 nationally in opponent field-goal percentage (34th…41%), opponent two-point percentage (39th…46.1%) and opponent three-point percentage (30th…31.9%).

Alabama is a team built on filling passing lanes, blocking shots and playing hard-nosed defense. In 8 of the Tide’s 12 losses this season, they’ve allowed opponents to shoot higher than 44% from the field. Bama is averaging only 66.9 points per game in their 12 losses this year. Opposing teams who hit 7 or more three-pointers against Alabama are 10-2 this season.