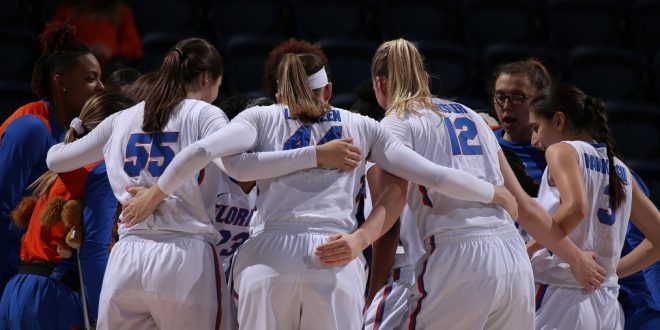 After months of ups and downs, tight games and an ongoing battle with injuries, the Gator women’s basketball team starts anew with the start of the 2018 SEC Tournament in Nashville, Tennessee. The Gators secured the No.11 seed Sunday with Vanderbilt’s upset win over Arkansas. In its first-round game, Florida faces one of the three teams they beat in SEC play this season. The No.14 seed Ole Miss Rebels will be the Gators’ first-round opponent Wednesday in the SEC Tournament.

Ready to Make a Run

The Gators have had several close calls this season against some of the SEC’s elite. They experienced a grueling six-game stretch where they fought with these teams until the very end and even had a chance to win it. Florida comes into the SEC Tournament with a clean slate and exuding confidence.

This SEC Tournament will be the last for seniors like Lorenzen but the first for the freshman and players like junior guard Funda Nakkasoglu, who sat out last year due to transfer rules.

Lorenzen wants her inexperienced teammates to enjoy the moment but also use the experience they gained from the regular season.

The conference has come to realize the fight that the Gators play with night in and night out. Opposing coaches have expressed their concerns heading into games against the Gators because of their ability to keep playing until the buzzer sounds, no matter what the score says. The team has kept preaching that they have improved throughout the season, even though it hasn’t shown in the win column.

Lorenzen said the team is ready to show the doubters that the team has improved during this SEC Tournament.

In their first two meetings, the Rebels and Gators engaged in some nail-biting finishes. The first meeting saw the edge go to Ole Miss in a back-and-forth double overtime game where missed free throws down the stretch proved costly for Florida. In the second meeting in Gainesville, the Gators finished the game on a better note, storming back from a 13-point deficit by outscoring the Rebels 18-4 in the game’s final quarter.

The Gators have taken pride in fighting with some of the top teams in the conference. The Rebels haven’t experienced similar success. Ole Miss has been blown out by most of the conference’s top teams. The Rebels haven’t won a game since they beat the Gators in double overtime back on Jan. 7. In that game, the Gators had some breakdowns late on the defensive end. They were also put behind the eight ball with 11 first-half turnovers that the Rebels turned to 18 points.

In Florida’s win over the Rebels back on Jan. 21, the Gators dominated on the boards, outrebounding the Rebels 43-24. The Gators were able to cut down the turnovers to 14 for the game, which isn’t as high as compared to the total from their first meeting.

Expect this game to go down to the wire once again. For the Gators to advance to the second round, they need to play with the similar fight they have been playing with as of late. A major key is to dominate on the boards again and try to limit mistakes. Florida experienced some trouble against Georgia Sunday with getting set on defense in transition. That will need to be corrected if they want to secure an SEC Tournament win Wednesday. The Gators also need to be hitting from the beyond the arc. The last two games, Florida has failed to hit the double-digit 3-point mark. The 3-point shot is needed for Florida to advance in this tournament and make a deep run.

As the Gators welcomed sophomore guard Delicia Washington to the starting lineup in Sunday’s loss to Georgia, they might have lost another starter. Florida senior forward Haley Lorenzen suffered a lower right leg injury when she came down awkwardly in the fourth quarter. She was helped off the court and was seen with crutches postgame. Lorenzen was seen wearing a walking boot during team activities Monday. Her status for Wednesday’s game remains unknown. If she is unable to go, expect Mikayla Hayes to start with her and Jalaysha Thomas splitting minutes.

The Gators and Rebels will close Round 1 of the SEC Tournament Wednesday afternoon. Tip-off is scheduled for approximately 2:30 p.m. EST Wednesday. The start time will come 30 minutes following the end of the Vanderbilt-Arkansas matchup, which will start at 12 p.m. EST.