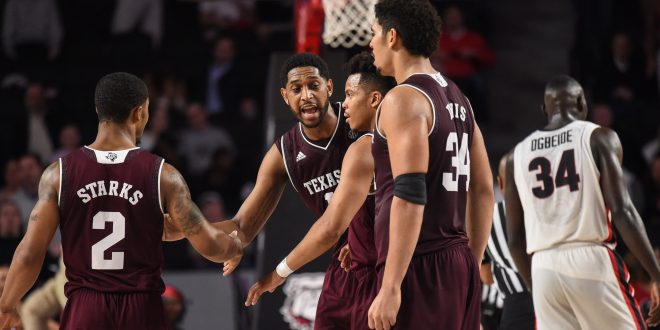 Heading into their final SEC regular season game with a four-game losing streak, Alabama travels to take on Texas A&M.

This will be the second time these two teams have met this season. The Crimson Tide are hoping to use their previous victory of 79-57 against the Aggies as motivation for another win.

Alabama has lost two home games recently with a blowout by Florida on Tuesday as Jalen Hudson put up 27 points by his lonesome. This now puts Alabama with an overall season of 17-13 and a conference record of 8-9.

Averaging 18 points per game, Collin Sexton is the key to this Alabama team. He’ll need to execute if the Crimson Tide want to bring home a win.

We have to put this one in our rear view mirror. On to Texas A&M.

Last time at home, A&M lost to Mississippi State. The Aggies look to extend their two-game win streak since then though, as they play their final game at the Reed Arena this season.

Named to the 2018 SEC Men’s Basketball Community Service Team, Tonny Trocha-Morelos, along with his graduate teammate Duane Wilson, will be recognized on senior day by the Aggie family. Trocha-Morelos has been a reliable player for Texas A&M this season as he shoots 41% from the field and 32% behind the arc.

One more time to Rock Reed this season

CBS Sports Bracketologist Jerry Palm had Alabama at an 11-seed heading into the Florida game, but after that loss, it bumped them down to 12. As for Texas A&M, they are set as a No. 9 seed playing St. Mary’s in Wichita.

This SEC match-up is scheduled to take place in College Station on Saturday. Tip-off begins at 1 p.m. and coverage can be found on ESPN 2.