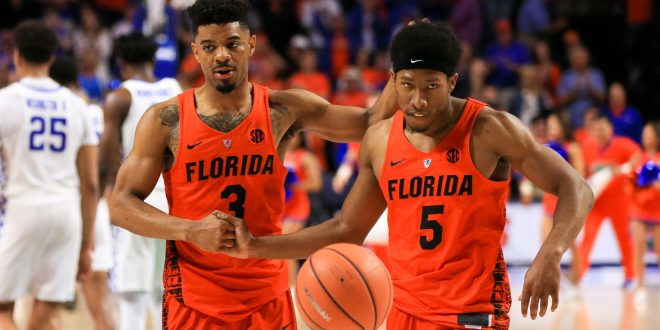 The energy and confidence the Gators came into this game with is something that has been lacking throughout the season. This was undeniable after the Gators took an 80-67 win against the Kentucky Wildcats in Gainesville Saturday.

Head Coach Mike White said yesterday, “Kentucky is coming in six weeks older, we got better and they’ve gotten a lot better.” But as the Gators wrap up their regular season at home we see a team that has matured during the last three games. When we say three games we’re also talking about that 62-57 loss against Vanderbilt, a clear wake-up call for the team.

The Gators drove in their shots more not just relying on the threes, something Coach White has been asking from the team for some time and on the defensive end, the team is almost unrecognizable.

Allen on the attack

KeVaughn Allen started off cold, but halfway through the first, the fans started to see the guy everyone has been looking for all season. Although his first three wasn’t until 3:57 remaining in the first, after that we saw an aggressive guy on both ends, with seven assists and eight rebounds.

“The seven assists meant more because I was able to help out my teammates,” said Allen when asked what meant more to him. Allen transitioned and attacked well helping other Gators get their shots in.

The Gators closed out the first half leading by 15 points, 12 of which came from beyond the arc. Including another at the buzzer three by Allen, who gave us a better reaction than the Auburn buzzer beater.

Both teams ran into plenty of foul trouble in the second. The Wildcats began to close the gap with free throws, but it was clear if they wanted to get more done they were going to need to respond on both ends.  Kentucky’s head coach John Calipari knew some changes needed to be made, starting with the defensive glass, but he says they’re still a young team who have a lot of learning left.

The biggest takeaway for the Wildcats was their inability to pass the ball. Players held on tight, yet couldn’t get their hands on the ball for rebounds. Kentucky just couldn’t find their rhythm on either end of the floor. In just the first half, the Wildcats gave up the ball eight times.

“This is who we were last month,” said Coach Calipari, “You just can’t win like this.”

Hudson shuts it down

With 22 points, the Jalen Hudson from the beginning of the season returned.

“He’s a great shooter,” said Wildcat’s Shai Gilgeous-Alexander on Jalen Hudson’s 22 points. Hudson who had fallen off for the last few games made sure to close the regular season on a high note.

Give credit where it’s due

Coach Calipari gave Florida credit for their performance saying they had an unbelievable game.

The team we saw today on the court for Florida is one we could have never guessed coach White was complaining about having a bad practice yesterday.

The Gators are starting to see the light at the end of the tunnel and shooting to have a lot more basketball left to play.

“You have to have a competitive spirit or you will not advance in this game,” said Coach Calipari post game, and it seems the Gators still may have a lot of opportunities to show that fight after this win. As for the Wildcats, this may be their wake up call to go back to their defensive drawing board.

The power of the Cheeze

Senior Chris Chiozza broke Florida’s record for assist today on senior day in front of a home crowd of over 10,000. Coach White described Chiozza as the best guard in Florida’s history.

“I wanted this to be a positive memory for them and their teammates did that,” White said.