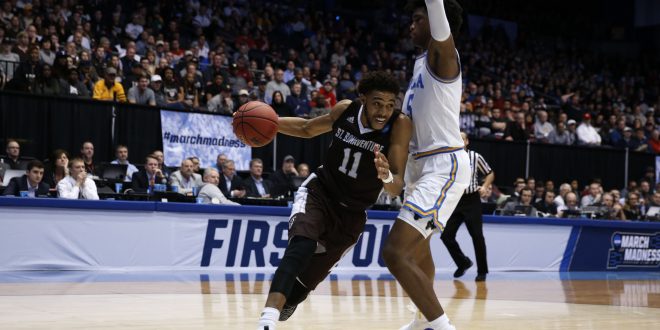 The St. Bonaventure Bonnies (26-7) defeated UCLA (21-12) by a score of 65-58 on Tuesday night for their first NCAA tournament win in 48 years. The Bonnies were led by junior forward Courtney Stockard who scored 26 points after returning to the game from a hamstring injury.

St. Bonaventure head coach Mark Schmidt had plenty to be proud of on the defensive end. UCLA shot 42 percent from the field but committed 20 turnovers, tied for their season high. On average this season, the Bruins had committed 11.8 turnovers per game. The Bonnies’ zone defense gave the UCLA fits, especially junior guard Aaron Holiday. The Pac-12’s leading scorer put 20 points on the board but committed 10 turnovers, including three in the final 29 seconds.

The Bonnies struggled offensively themselves. Stockard’s 26 points on 9-of-20 shooting was a bright spot. He averaged 23.25 points per game in his last four games.  St. Bonaventure’s all-time leading scorer, senior guard Jaylen Adams went just 2-0f-16 from the field. He missed 14 of his first 15 shots but sealed the win with a jumper and three free throws in the final minute. After the game, Adams credited the win to the team’s veteran leadership and said winning games on the defensive end is nothing new for the Bonnies this season.

UCLA held the lead for an extended period of time in both halves but St. Bonaventure rallied back both times. Senior guard Matt Mobley added 14 points to the Bonnies’ offensive cause and junior forward LaDarien Griffin contributed 10 points of his own.

The eleventh-seeded Bonnies now head to Dallas where they’ll face the sixth-seeded Florida Gators (20-12) on Thursday night in the East Region. Tipoff is set for 9:57 p.m. Florida is 2-0 all-time against St. Bonaventure and has advanced to the Elite Eight or further in each of their last five NCAA tournament appearances.

I'm an above-average golfer with surprisingly great touch around the greens. Click on my twitter link for some sports talk.
@Ry_McGinn
Previous Seven Run 5th Inning Carries Gator Baseball To A Victory Over FSU
Next Florida Women’s Swim and Dive Team Take on the NCAA Championship