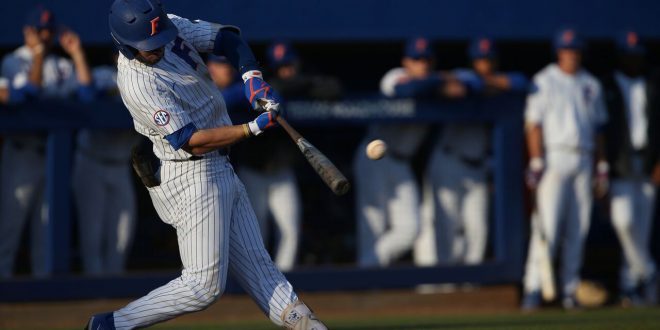 With 6,042 fans in attendance, Tuesday night marked the highest ever attended Sunshine Showdown at McKethan Stadium. Prior to this game, the Gator baseball team had won 10 of their last 11 meetings against Florida State, including five in a row. This time was no different — the Gators came out on top 12-6 thanks to a huge offensive performance.

The Seminoles jumped out to an early lead, hitting back-to-back home runs in the first inning. They then added two more runs in the third on another home run to make it 4-1. But the Gators were able to bounce back and score seven runs in the fifth inning, creating a 10-4 lead. From that point, Florida never looked back and scored two more times to end any comeback hopes for FSU.

With so much offensive production, there were several Gator players who had big nights at the plate.

Jonathan India hit a pair of home runs, bringing his season total to a team-leading six. Between RBIs and runs scored, India had a part in half of all the Gators runs scored Tuesday night. Over the last 10 games, India is hitting .500 with four home runs and seven RBI.

India says the changes he has made to his swing this year are what’s helping him be more of an offensive force now.

Nick Horvath also had a great offensive game — 3 for 4 with two RBI and two runs scored. Horvath credits his offseason focus on the mental side of the game for his success.

Austin Langworthy also had a 3 for 4 night with an RBI.

The Gators had 14 hits as a team throughout the night, with six of them going for extra bases.

Florida’s chances of winning this game weren’t looking so great after the first few innings. Florida State came out swinging and immediately put a crooked number up on the board in the first. Then the fifth inning happened and the entire course of the game changed.

Gator coach Kevin O’Sullivan says he’s very proud of the way his team fought back after getting behind early on.

The Gator pitching staff also had to push themselves to piece together the game after starter Jordan Butler struggled early and left the game in the third inning. After his departure, the rest of the staff allowed just three hits and struck out seven.

Florida is currently riding a four game win streak and holds a 16-3 record heading into conference play this weekend. The Gators will travel to South Carolina to take on the Gamecocks in a three game series that kicks off Friday at 7 p.m.