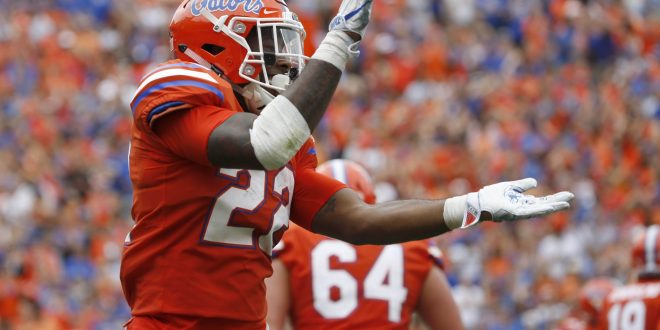 Todd Grantham is a new face to the Florida football coaching staff this season. Head Coach Dan Mullen hired Grantham, who was the defensive coordinator at Mississippi State under him last season.

Grantham has an impressive resume. He coached at Mississippi State when the Bulldogs defense finished 10th in the nation. The Bulldogs entered last season 110th in the nation in defense. They finished the season under Grantham allowing 302 yards per game. The Bulldogs allowed an average of 31.8 points per game in their 2016 season and Grantham led the team to cut this by 11 points ending the season with an average of 20.4 points a game.

Grantham began coaching in 1999 in the NFL as the defensive-line coach for the Indianapolis Colts. In 2010, after coaching on three different NFL teams, Grantham moved to coach college football. His career in college began in the SEC with the Georgia Bulldogs. In 2014, Grantham coached under Bobby Petrino but was hired by Dan Mullen at Mississippi State as defensive coordinator for the 2017 football season.

The Florida Gators have been known for their defense to be ranked high in the nation. Recently, however, this has not been the case.

Grantham comes into this season as the defensive coordinator with a Florida defense that allowed the most points allowed record dating back to 1946 (27.27 per game) and the most yards per game since 2007 with (349.3 per game.)

After day three of spring practice, Grantham has a positive outlook on this Gator defense going into this season.

Grantham says that the key components to a successful defense have more to do with than just the talent on the field.

The Gators will have their Orange and Blue Debut on April 14 with kickoff set for 3 p.m. Grantham and his defense will take the field for the first time.