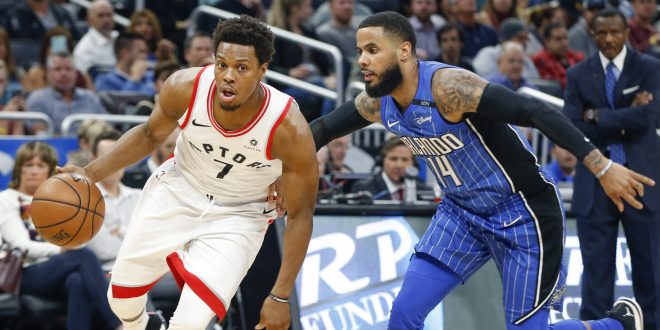 Magic Fall to the Toronto Raptors

The Orlando Magic continued their two game losing streak by falling to the Toronto Raptors Tuesday night at home. The final score was 93-86 and the two teams kept it close, until the end when Toronto’s defense picked it up.

The Magic Turned to Dust

Throughout the game, the two teams went back and forth. In the beginning, the Magic were right there with the Raptors. It looked convincing that the Magic had it together when Orlando’s Jonathan Isaac sank two three pointers in the first quarter, and Aaron Gordon added some transition dunks.  The game was almost tied 52-51, with the Magic only trailing by one point.

The Magic even had their biggest lead of the night by mid-third quarter, by 7 points. However, when it came to the fourth quarter, Orlando couldn’t keep it going. During the first three quarters of the game the Magic hit 47.9% of their shots, but that didn’t happen in the fourth. They missed the first 11 shots of the fourth quarter, and didn’t hit one until Nikola Vucevic had a jumper with 4:34 left to play. They also turned the ball over five times within the final 12 minutes of the game, and they only made three of 19 shots. The Magic even tied the franchise for the record low of free throws made and attempts of three and five, respectively.

This gave the Raptors an advantage that they definitely took.  Kyle Lowry hit a three that gave Toronto a 81-78 lead, then Pascal Siakam added another three with right under five minutes left in the game. This then gave the Raptors a 16-2 run. Toronto had three 3 pointers in the final period and outscored Orlando 25-10 in that quarter as well. The Raptors came out with the win despite having DeMar DeRozan, the all-star guard, out of this game with a quad injury.

The Magic were led by Shelvin Mack with 17 points. Not far behind was Gordon with 16 points. Gordon made his return Tuesday night after missing five games due to a concussion. Gordon also went 7-of-15 shooting, added six rebounds and three assists.

Vucevic added 15 points and nine rebounds for the Magic.

On the Raptors side, Kyle Lowry added 25 points to lead the Raptors. However, the defense is really what put Toronto on top. They couldn’t have won this game without the defensive efforts of Delon Wright, Pascal Siakam, Lorenzo Brown, and Lucas Nogueira.

Beasts of the East

The Toronto Raptors currently lead the Eastern Conference of the NBA with a 53-18 record. They’re five games ahead of the second place team in the conference, the Boston Celtics. Meanwhile, the Orlando Magic are at the bottom of the league, placing second to last in 14th place. The Magic currently have a 21-50 losing streak.

Up next, the Magic will get ready to take on the Philadelphia 76ers at home on Thursday, while Toronto will travel to Cleveland to take on the Cavaliers Wednesday night.

"We want it a lot more than any other bench." – @Zo_Brown