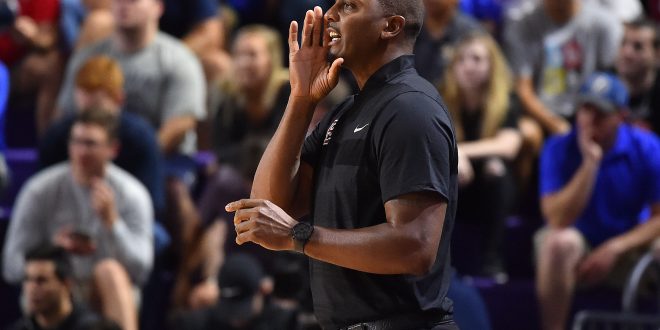 Penny Hardaway will take his coaching to the next level. Mandatory Credit: Jasen Vinlove-USA TODAY Sports

There’s a new trend emerging in college hoops: former NBA greats are returning to their Alma mater to coach on the same court where they began their historic careers. We recently saw it when Chris Mullin took over St. John’s University in 2015, followed by Patrick Ewing reclaiming his former glory at Georgetown this season. Now, there’s a new name to add to the list.

On Tuesday, Penny Hardaway was introduced as the Memphis Tigers’ head coach. Upon introduction, he voiced his plans to bring a more aggressive style of play to the Tigers.

Memphis finished this season with a 21-13 overall record. They were defeated by Cincinnati in the AAC Tournament, and they did not make the NCAA Tournament. Junior Jeremiah Martin led the team this year with 18.9 points per game. Unfortunately, Martin broke his foot late in February, dooming the Tigers’ season.

Perhaps he will be comforted by his new coach, who also suffered a foot injury while at Memphis. However, the nature of Hardaway’s foot injury was much different. His injury came from a gunshot. After his freshman year at Memphis (then called “Memphis State”), Hardaway was visiting his cousin when suddenly they were both forced to the ground by gunmen. The men turned out to be robbers, stealing everything from Hardaway and his cousin, LaMarcus Golden. As the robbers were driving off, one of them fired a round that pierced Hardaway’s foot.

Memphis will name Penny Hardaway as their next men’s basketball coach.

A legendary figure in the city & in program history, Hardaway just won a state title on Saturday as the coach of Memphis East HS. pic.twitter.com/MCrSo5gv2R

The bullet fractured three bones in Hardaway’s foot, but he was able to recover. Afterwards, he went on to put up a whopping 22.8 points per game, 8.5 rebounds per game and 6.4 assists per game during his junior year. Of course, he then went on to team up with Shaquille O’Neal on the Orlando Magic to form one of the most exciting duos in basketball history. He was nearly robbed of an outstanding career because he was in the wrong place at the wrong time. However, lucky Penny cashed in.

Hardaway will bring back his new knowledge for the game and familiar passion for his hometown. He proved his ability to coach at the high school level, coaching East Memphis High School to three consecutive state titles. While this is his first experience as an NCAA coach, he should have no problem commanding respect from his players, and his fame alone should raise the Tigers’ recruiting to new levels. Get ready for Memphis to start making some serious noise.