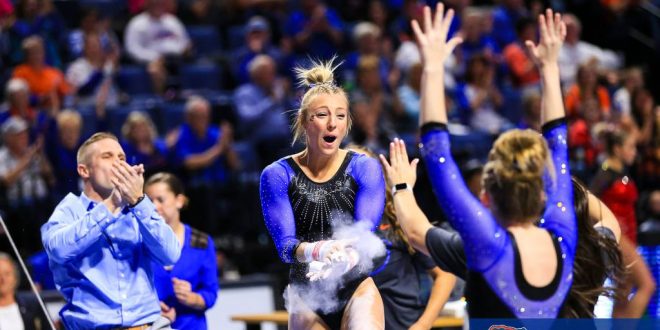 The Gator Gymnastics team finished in third place at Saturday’s SEC Championship. The final four top scores were as follows:

The Gators earned at least partial titles in all four rotations. Freshman Alyssa Baumann scored 9.975 on beam. This was her collegiate-best score. Baumann also earned All-SEC and SEC All-Freshman awards. Florida’s overall score on beam was 49.550 and led the meet.

Florida performed well on vault, with senior Alex McMurtry scoring at the top. A nearly-perfect 9.975 earned her the event title. The Gators scored a 49.475 in this rotation. Halfway through the meet, Florida had the lead.

On uneven bars, McMurtry and sophomore Amelia Hundley were standouts. Each earned All-SEC honors in this event. The Gators overall score on uneven bars was a 49.400.

The floor rotation was what ending up hurting the Gators the most. Junior Alicia Boren earned the event title with a 9.90. However, McMurtry and freshman Megan Skaggs each fell in their routines. This caused a significant drop in the Gators score for this rotation, earning a 48.400.

The NCAA Regional Championship is April 7. There are six location sites. Teams will be assigned to locations on March 26. NCAA.com will post the locations at 4 p.m.

Born and raised at the ballpark! Typically quiet- until it comes to sports. I'm a South Florida native with a passion for baseball nearly as strong as my faith. Grew up in garnet + gold, turned out sporting orange + blue. Likely to be found with a camera. And yes, I take food pictures.
@victoriarossman
Previous Gator Bats Electric in 17-2 Rout of Arkansas
Next Arkansas Pitching Too Strong As Gators Drop First Game Of Series