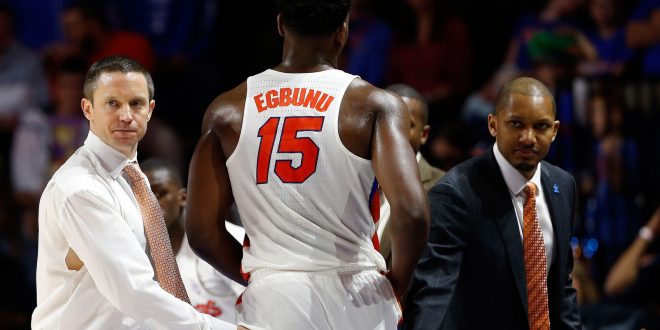 After missing the entire 2017-2018 season with a torn ACL, John Egbunu has decided to forgo the process of receiving a medical redshirt for a sixth season of eligibility. Egbunu thanked “Gator Nation” in an Instagram post late Monday night, indicating that he will be moving on from the University of Florida to pursue a pro career. Egbunu is already 23 and would be a 24-year old senior had he stayed in college for another season.

As expected, it appears John Egbunu will not return to UF next season, per his Instagram. Best of luck to an extremely hard-worker who was always very media friendly. #Gators pic.twitter.com/eKCTLGkhYn

John Egbunu’s UF career was unfortunately plagued by injuries. The Nigeria-native suffered a season-ending thumb injury his sophomore year and a season-ending torn ACL during his junior season. During the 2015-2016 season, Egbunu led Florida in blocked shots (48), field-goal percentage (59.1%) and finished second in rebounds per game (6.5 RPG). His junior year featured 19 starts in 24 games before blowing out his knee on February 14 vs. Auburn. Egbunu averaged 7.8 points, 6.6 rebounds and 1.5 blocks per game that season and led the Gators with 31 dunks despite playing only 24 games.

Egbunu officially appeared in 58 games during his career at the University of Florida, recording 578 points (10 PPG) and 378 rebounds (6.4 RPG). During his sophomore season, Egbunu set the single-season dunk record with 75 rim-rattling slams, including a 9-dunk performance vs. Kentucky. Egbunu finished his career with 7 double-doubles, 28 double-digit scoring games, two 20+ point performances and 13 double-figure rebounding games. He also posted a career average of 1.45 blocks per game, which ranks 4th all-time in program history.

While Egbunu missed most of the 2017-2018 season, Florida will have a pre-season battle for the starting center position next season. Kevarrius Hayes will return as the team’s only senior center, but is not guaranteed the starting job. Hayes is a solid shot-blocker, but doesn’t have the most developed offensive game in the low post. Gorjok Gak is another option, standing at 6’11”, 245 pounds. Gak will be a junior and work in progress, but was slowed down for most of the 2017-2018 season with a “bum knee,” as described by Mike White. It is unclear what Gak’s progression would’ve been had he been healthy for the duration of the season. Dontay Bassett and Isaiah Stokes are intriguing, younger options at the five. Bassett saw most of his minutes towards the end of the season and has the ability to stretch the floor with an efficient mid-range jumper. Stokes, Florida’s top recruit during the 2017 cycle, missed the entire season with a torn ACL suffered in high school. Stokes has the touch of a guard, the ability to shoot the three-pointer and a wide frame to create space in the post. Stokes was last listed as 6’8″, 270 pounds but has slimmed down throughout the course of last season with a better diet and increased workout regiment. There is no clear indication of who will start at center next season, with a battle sure to come about during summer workouts.