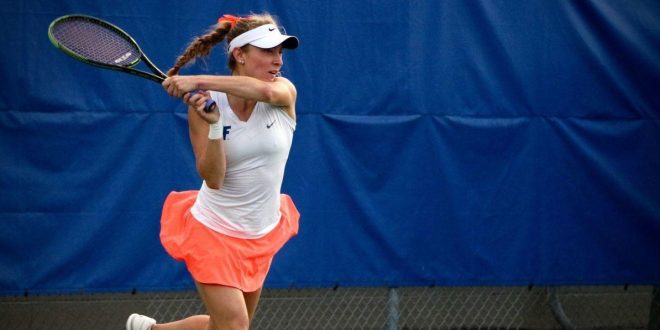 Both Florida Gator Tennis teams are just one week away from closing their respective regular seasons. The women’s side have only two games left against the Kentucky Wildcats and the Vanderbilt Commodores. Meanwhile, the men’s side only have one game left against the Alabama Crimson Tide. The three games will be later this week in Gainesville. This past weekend, both teams beat both of their rivals to continue their successful seasons.

A Remarkable Weekend on The Road

On Saturday, the women’s team beat the South Carolina Gamecocks 4-2 in the singles matchups; Anna Danilina, Josie Kuhlman, McCartney Kessler and Katie Kubicz were the winners for the Gators. Unfortunately, neither Victoria Emma nor Peggy Porter could overcome their rivals.

The team extended their all-time dominance against the Gamecocks to 44-2. This was the first time in 11 games that the No. 5 Gamecocks lost at home.

Bryan Shelton, Florida Gator Men’s Tennis head coach, earned his 100 victory as a Gator after this victory, which was the 7-0 one for the team.

For the women’s side, this was its eight victory in its last 10 games. The team now has a 15-6 overall record.

On the other hand, the men’s side now has a 14-8 overall record after its victory over LSU. For this team, this 7-0 shutout came in the perfect moment because of its struggle in its last road stretch of the season; it lost two of the four-game stretch.

With the SEC Tournament in the horizon, both teams are looking to close their regular season at the top three of their respective SEC standings. The women’s side is at the top of its standings with 10-1 record while the men’s side is in third place with an 8-3 record.

Journalism student at the University of Florida. Venezuelan and future sports journalist.
@joseso2793
Previous Stanton Off To A Slow Start In New York
Next New York Mets Sweep Three-Game Series With Washington Nationals