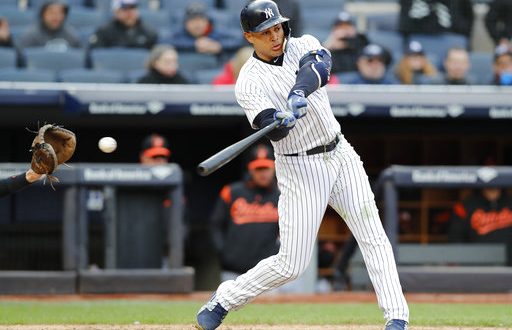 New York Yankees' Giancarlo Stanton strikes out with two men on base during the twelfth inning of a baseball game against the Baltimore Orioles in New York, Sunday, April 8, 2018. The Orioles defeated the Yankees 8-7. (AP Photo/Kathy Willens)

Stanton Off To A Slow Start In New York

New York Yankees fans thought they were getting an undeniable offensive force who would just add to the already loaded lineup when they acquired Giancarlo Stanton in the offseason. But much to their displeasure, that’s not what they’ve gotten so far this season. Instead of home runs, Stanton continues to pick up strikeout after strikeout. After a 0-7 with five strikeouts performance against the Baltimore Orioles on Sunday, Stanton’s average on the season now sits at a dismal .167.

Stanton bookended his home Yankee debut with a pair of five-strikeout games.

In New York’s 11-4 win over the Tampa Bay Rays in their home opener, Stanton didn’t provide any of the offense and fell victim to the strikeout in all five of his at-bats.

Sunday’s game wasn’t much different, just this time he added a lineout and a fielder’s choice.

After New York jumped out to an early lead, Baltimore battled back and ended up sending the game to extras. The Orioles went ahead 8-7 in the top of the twelfth, forcing the Yankees to score or lose the game.

With two outs, runners on first and second, and the game on the line, Stanton stepped in the box. He was already 0-6 on the day with four strikeouts. On the fourth pitch of the at-bat and a 1-2 count, Stanton swung and came up empty. This ended the game and brought Stanton to a 0-7, five strikeout day.

Stanton chalks his poor performance up to a bad week and says he just has to keep grinding.

Overall this season, Stanton is 7-42 with 20 strikeouts and three home runs. Of his 42 at-bats, 47.6 percent of them have been strikeouts.

After Sunday’s 0-7 performance, Stanton became the first player in the live ball era to go hitless with five strikeouts in two games in the same season. Stanton also became just the third player in the past 100 seasons to post multiple five-strikeout games in one season.

Yankees manager Aaron Boone says Stanton’s problem is his timing and believes he’ll get it figured out.

Stanton plans to spend the next few days trying to fix his problem as the team prepares for its rivalry matchup against the Boston Red Sox on Tuesday.

Everyone knows New York fans are tough critiques. And that remains true even for superstars like Stanton.

The boos from the crowd echoed throughout the stadium after Stanton fanned on the final strike of Sunday’s game, as they also did when he struck out in a clutch situation in the eighth.

With fans expecting so much from Stanton, his 3-28 with 16 strikeouts over the six-game homestand was less than impressive. Stanton shrugged off the dissatisfaction from the fans and knows he has to do more.

Stanton, along with everyone else in New York, hopes he can get back to the player he was last year when he launched a major league-leading 59 home runs.