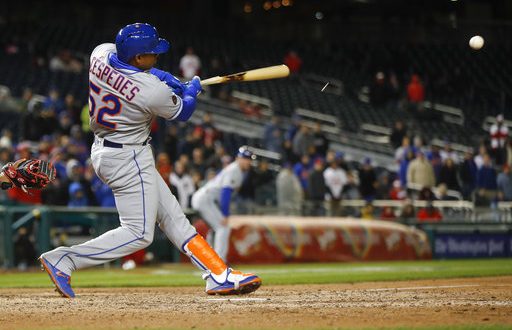 The match-up between the New York Mets and the Washington Nationals was more than the score on the board. The New York Mets are starting off this season strong with a record of 7 and 1. After sweeping the Nationals in a three-game series, the Mets are looking to continue that momentum.

The Mets won the first two games 8-2 and 3-2 as well as ending the series with 6-5 victory in 12 innings. The Nationals started out strong with 2-0 in 1st until the Mets passed them by putting 4 runs on the board in the 3rd. By the 7th inning, the score was tied 5-5. The game continued to 12 innings when Yoenis Cespedes walked up to bat. The extra innings not only helped the Mets take the series but became their 5th straight win.  Now, the Mets are hoping that the results of last night’s game gave the rest of the league a message.

Significance of their victory

To the Mets, this win was more than a three-game series sweep. Matt Harvey, pitcher for the New York Mets, and Mikey Callaway, manager of the Mets, are among the people in the Mets franchise that are happy with the outcome of the game. They both agreed that this was a big step early in the season. According to Harvey, he thinks that his team deserved the victory.

Mikey Callaway is happy with his team’s execution even though they had a couple of rough patches. He is not only proud of how his team played but enjoyed watching his team overcome their challenges in the game.

With that game behind them, both teams are moving forward tonight. The New York Mets will travel to Miami to play the Marlins at 7:10 p.m., while the Washington Nationals will host the Atlanta Braves at 7:05 p.m.

Rays, Marlins and Braves Round Up

As we come to an end with the first quarter of the MLB season, let’s …