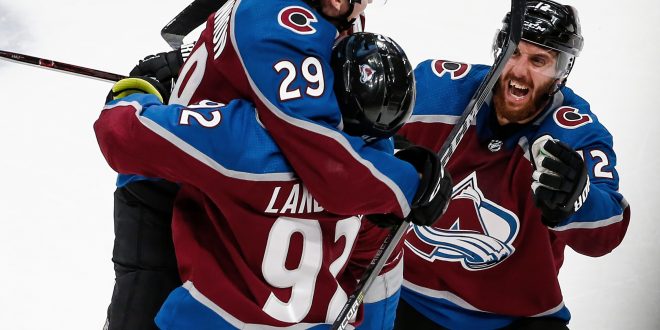 Colorado Avalanche center Nathan MacKinnon (29) and Patrik Nemeth (12) jump on Gabriel Landeskog after Landeskog scored an empt-net goal against the St. Louis Blues during the third period of an NHL hockey game Saturday, April 7, 2018, in Denver. Colorado won 5-2 to advance to the playoffs. (AP Photo/Jack Dempsey)

Avalanche Trying to Pull Off Huge Upset In First Round

There is nothing more dangerous in sports than a team with nothing to lose.

That is the mentality the Colorado Avalanche will have Thursday night when they begin a series against the Nashville Predators. Simply put: the Predators dominated all season long while the Avalanche made it by the skim of their teeth.

The young and inexperienced Avalanche stumbled their way into the postseason as they went 1-2-1 in their final four games. The Predators on the other hand have won five out of their last seven.

With everything on the line, the @Avalanche pulled it off.

There is a huge difference between the regular season and the playoffs in the NHL.

It will be interesting to see how Colorado’s young core fare in their first playoff game against Nashville who played in the Stanley Cup last season.

Jonathan Bernier doesn’t think his team will have a problem adjusting to the bigger stage. He says that everyone in the locker room has played in playoffs prior to playing in the NHL so they should just reflect on those moments.

Playing a team a few times over the course of a long season is a lot different than playing them in a best of seven game series. Forward Mikko Rantanen says that the experience will be good for his team.

Nothing New For The Predators

Unlike the Avalanche, the Predators are preparing for their fourth playoff appearance in four years.

Nashville knows what it takes to win in the postseason as they fell two games short of the franchise’s first Stanley Cup. They know the importance of great goalie play in the playoffs.

Roman Josi expects nothing but solid play from goalie Pekka Rinne from now till the end of the season. Josi says that Rinne is the backbone of the team.

Nashville will not be taking Colorado lightly as they have seen what the Avalanche are capable of. Josi says what makes Colorado dangerous is that their line is nothing to mess with.

The Western Conference has its champion and it's the @PredsNHL! #StanleyCup pic.twitter.com/B6up76HhxR

The series between the Predators and Avalanche begins at 9:30 p.m. in Nashville. The game will be televised on the NBC Sports Network.