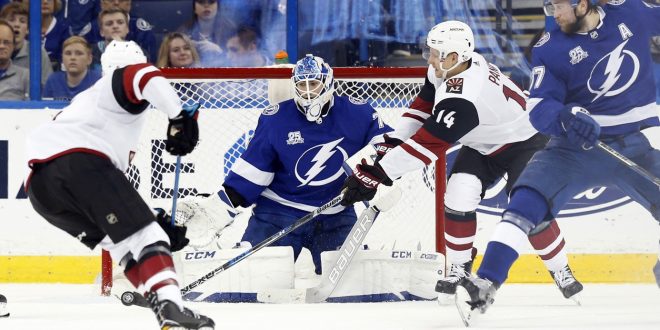 When the Lightning and Devils face-off Thursday night in the Amalie Arena, it will be a matchup characterized by speed. Both teams can get up the ice quickly and leave defencemen paralyzed. New Jersey is making its first playoff appearance in 5 seasons. They have a very tough playoff test against Tampa Bay. Tampa Bay’s been at the top of the league throughout the season, and defeating them in a 7-game series is a tricky task for anyone.

The biggest hope for the Devils is that their 3-0-0 record against Tampa Bay in the regular season wasn’t a fluke. New Jersey beat the Lightning in all three of their meetings albeit each victory was decided by a single goal. The Devils acquired the number one overall pick in the NHL draft this year: Nico Hischier. The 19-year-old has played excellent in his debut while scoring 52-points.  Both teams have a Hart Trophy finalist.

The NHL MVP race is tight and both of these playoff teams have a finalist. Taylor Hall’s improvement has been crucial to the Devil’s drastic turnaround this season. New Jersey was in a 5-year Stanley Cup Playoff drought before the emergence of Taylor Hall. At one point in the season, he went 26 straight games scoring at least one goal. His performance earned him one of the three finalists spots in the MVP race. Tampa Bay has an MVP candidate of there own; Nikita Kucherov is also a finalist.

Although Kucherov leads the league in goals, some consider Hall the favorite to win the MVP. Simply because Kucherov has a more talented supporting cast. The Lightning have the number one scoring offense in the NHL. They are third in the NHL in converting power plays. The Lightning are extremely quick and have the most consistent forwards in the NHL.

If the Lightning can limit their turnovers they become increasingly harder to beat. The New Jersey Devils are having an outstanding season. They deserve a lot of credit for their turnaround from only last year. They don’t seem ready for the stage against the most efficient team in the league. The Goalies for each squad are generally on par with each other. They are both consistent and provide their defenses with more confidence knowing they have a steady man between the pipes.

John Haynes believes that New Jersey can cause problems for the Lightning. They did beat them 3 times already and the Devils have been skating well the last month.

It will be very interesting to see if the Devils can put pressure on the Lightning. I think New Jersey is playing well enough to steal at least 2 games and make it a 6-game series. Tampa Bay has been ready for the stage while New Jersey can’t quite match up with the Lightning’s talent or experience. The firepower of Nico Hischier and Taylor Hall could be a lot to manage for goaltender Andrei Vasilevskiy. Vasilevskiy said he was worn out after the long season where he played over 60 games.

You can watch the game tomorrow night at 7 p.m. on the NHL Network.

Previous Avalanche Trying to Pull Off Huge Upset In First Round
Next First Round of NHL Playoffs: The Battle for Pennsylvania