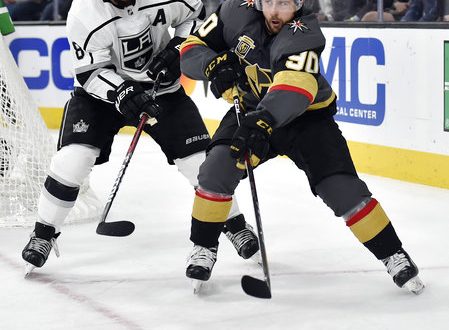 April 11. To the average person it’s just another day. But die heart hockey fans around the nation, and Canada, know it means much more than that. It’s the start of the NHL Playoffs and it starts tonight with a matchup between the Los Angeles Kings and the Las Vegas Knights at 10 in Las Vegas.

The Golden Knights have little bit of edge heading into playoffs

The Golden Knights are off to a hot start in their inaugural season finishing 51-24 overall and coming in first in the Pacific Division with 109 points. Las Vegas won the regular season against the Kings 2-1-1, but lacked an offensive attack on power play opportunities finishing 0-13. They’ll have a tough time matching up against the Kings, which is arguable the best defensive team in the league.

William Karlsson led the Golden Knights in goals this season coming in at third overall in the league with 43 goals.  The 6-foot-1 center also led the team in points (78). In addition to Karlsson, teammates Jonathan Marchessault, Eric Haula and David Perron are also making a difference. Marchessault is second behind Karlsson in terms of points (75), Haula comes in at second in goals (29) and Perron leads the team in assists (50).

Coach Gerard Gallant says one of the most important things during the playoffs is taking games one at a time.

The Kings need to step up in the postseason

Las Angeles finished 45-29 for its regular season and came in behind the San Jose Sharks at No. 4 in the Pacific Division with 98 points. The Kings were lucky enough to get the first wild-card spot in the west after their subpar season. Despite the series loss to the Golden Knights in the regular season, the Kings found a way to convert power play opportunities going 3-12 in the series.

Anze Kopitar led the Kings in goals during the regular season coming in tied for 15th overall in the league with 35 goals. The 6-foot-3 center also ranks first on the team in points (92) and assists (57). Dustin Brown leads the team in power flay goals (7), but it will be crucial for him to stay out of the penalty box as much as possible heading into the postseason. Brown spent the most time in the box this season, just two minutes short of an hour in total.

Drew Doughty, an alternate captain for the Kings, said its the little things that add up in the postseason playoffs.

Mari Faiello is a second-year journalism student and sports writer for the Alligator. She covers the University of Florida's softball team and has previously covered UF men's tennis, UF women's tennis and UF volleyball. She has worked at the paper since Fall 2017. She has worked at ESPN 98.1 FM - 850 AM WRUF since Spring 2018. Her favorite sports are volleyball, college football and hockey (Tampa Bay Lightning).
@@faiello_mari
Previous Rays Defeat White Sox in Front of Empty Stadium
Next Avalanche Trying to Pull Off Huge Upset In First Round