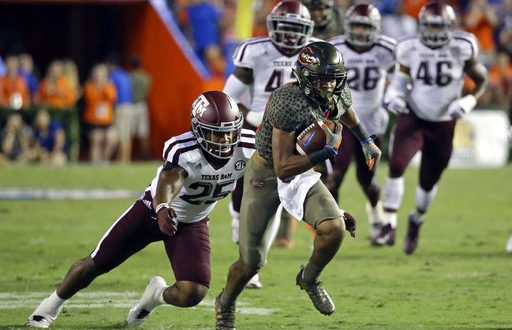 Heading into the Gators’ Orange and Blue game on Saturday we take a look into one of the most exciting positions on the field: Running Backs.

After the first couple practices it’s easy to conclude that the Gators have some serious talent at running back.

Jordan Scarlett still looks like an NFL running back, Dameon Pierce is tough to bring down and Adarius Lemon is very, very fast.

Lemons showcased his speed on a run last year against UAB and was clocked at 21.92 mph, according to a video analyst. For reference, former NFL running back Chris Johnson was clocked at 22 mph on a 76-yard TD run in 2010.

“I didn’t know I was moving like that. When I watch it, I was running pretty fast,” Lemons said. “I kind of waited a little bit and showed a little patience on that run. I had to let the holes open up and I once I found that crease, I hit it.

Lemons did it again in Florida’s scrimmage a few Saturdays ago, breaking free for an 88-yard touchdown run.

Knox followed Mullen from Mississippi State where he held the same position.

He comes into the position with over 20 years of coaching experience in the SEC including time at Ole Miss, Auburn and Mississippi State.

Most recently, Knox led the Bulldogs to a Taxslayer Bowl win over Louisville on December 30, 2017, as MSU’s interim head coach.

In 2017 he helped lead MSU to the third-best rushing attack in the SEC (249.6 YPG), lead the league in rushing attempts (579) in addition to giving up the fewest sacks (11) in the conference.

It is clear that Florida has all the key pieces to complete the running puzzle this year.

With the addition of the new coaches, returning star Jordan Scarlett, and fresh speed in Lemons UF should have one of the best running offenses in the SEC in 2018.