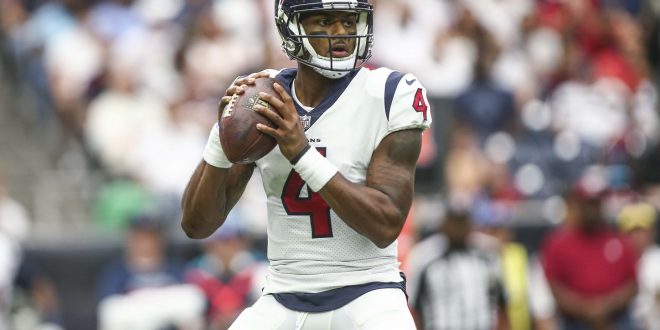 Deshaun Watson Trying to Come Back

Back in November, Houston Texans rookie quarterback Deshaun Watson had a season-ending surgery after tearing his ACL in practice. However, the injury isn’t holding him back. Now that he has recovered, he says the injury isn’t going to change how he played the game.

Watson was a threat on the field before his season-ending injury. He threw for 19 touchdowns and ran for 269 yards in just seven starts.

While Watson’s injury officially happened during practice, but Watson thinks his tear happened in his previous game against the Seattle Seahawks. The Texans had an incredible 41-38 win over the Seahawks, in which Watson threw for 402 yards, four touchdowns, three interceptions and 67 rushing yards.

Watson previously tore his ACL during his freshman year at Clemson. However, the following season, he led Clemson to the National Championship Game and came in third for Heisman Trophy voting.

This is Watson’s second time recovering from an ACL tear, which has helped him stay confident. He believes he’ll be able to return back to the way he played before his injury.

Watson says he’s taking things one week at a time though. He doesn’t want to get ahead of himself.

He’s not sure to what extent he will participate in off-season training camps yet though.

Deshaun Watson is looking for a strong comeback. pic.twitter.com/qwRJYSly6t

Last month at the NFL owners meeting, Texans head coach Bill O’Brien said he is confident in Watson’s skills and performance. The Texans are now reworking their offense for next season to focus on Watson’s strengths. This just shows that O’Brien is confident in his ability.

Watson says they have a long way to go, but the team will continue to focus on the until goal.

Sydney is a senior studying telecommunications with a specialization in sports media at the University of Florida. She is a multimedia sports reporter for ESPN 98.1 FM/850 AM WRUF and WUFT-TV.
Previous Game 2 Preview – Jazz vs. Thunder
Next The Comeback Kid: Carson Wentz