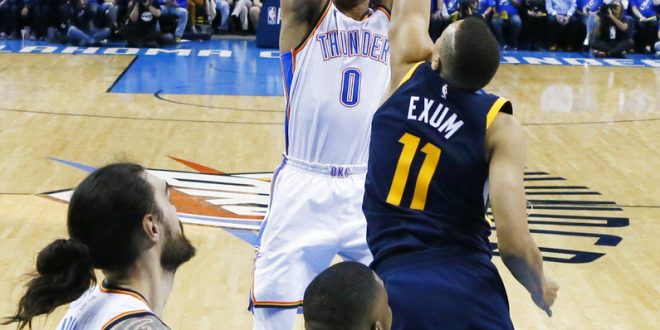 The Oklahoma City Thunder will take on the Utah Jazz in Game 2 a.

In Game 1, the Jazz built a 16-4 lead early in the game and made the first six minutes look like just another regular season game for the OKC. The Jazz limited the Thunder to nine offensive rebounds and held the lead up until the end of the first quarter. That was until forward Paul George racked up 36 points, propelling the Thunder into a 116-108 win. George set an Oklahoma City playoff record with eight 3-pointers, surpassing the previous mark of five. He made 13 of his 20 overall shots and made eight of 11 shots from long range.

One major area that the Thunder has pointed out in the build up to Game 2 is turnovers. 17 of them led to 20 Jazz points in game one which helped contribute to 21 Utah fast break points in the game. Jazz defenders blocked Thunder passes with ease and made it hard for the Thunder offense to create an open lane.

For the Jazz, head coach Quin Snyder will have to make some adjustments after Game 1. He obviously must square things up defensively and avoid getting into another shootout with OKC. Snyder also may have to consider what to do with Derrick Favors. Favors was  outplayed by Carmelo Anthony in Game 1.

The Thunder may be without Paul George in Game 2, who is dealing with a right hip contusion. The injury was suffered in Game 1 and although he is said to be attending practice, his status is still unknown.

The Jazz have an injury concern of their own with Donovan Mitchell suffering from a bruised toe. After going through an MRI, the team revealed Mitchell has a contusion on his left foot and his status for Wednesday’s Game 2 remains unknown.