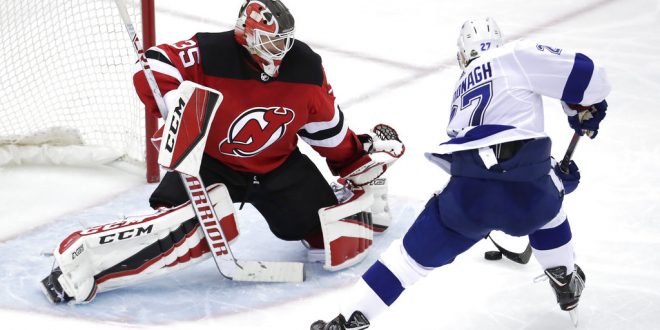 New Jersey Looking to Even Up the Series Against Tampa Bay

If the Tampa Bay Lighting thought that their first-round match-up against the New Jersey Devils was going to be a breeze they have another thing coming.

The Devils smoked the Lighting in game three of the best of seven series as they won 5-2. New Jersey shot 20 times in the final period scoring four times.

Time to Make Some Adjustments

If the lightning expect to win like they did in game one and two of the series, they will have to limit the mistakes.

One of the main reasons for their game three defeat was the number of power plays they gave the Devils. Tampa Bay gave New Jersey five power-play opportunities in game three, one that resulted in Will Butcher tying the game on a 5-on-3 opportunity.

The Lightning still have good reason to be confident heading into game four. They didn’t trail for the first 172 minutes of the series.

“We still feel like we’re in a good spot in the series,” McDonagh said. “If we keep ourselves within our system and playing the right way, we feel we’ve got a good chance.”

Every game the rest of the way for New Jersey will be more important than the last.

If the Devils win, the series turns into a best of three as the two teams travel back to Florida for game five. If the Lighting find a way to escape New Jersey with a game four win, that will put them in the ultimate drivers seat the rest of the way.

Previous Pelicans Up 2-0 On Portland
Next J.J. Watt’s Comeback