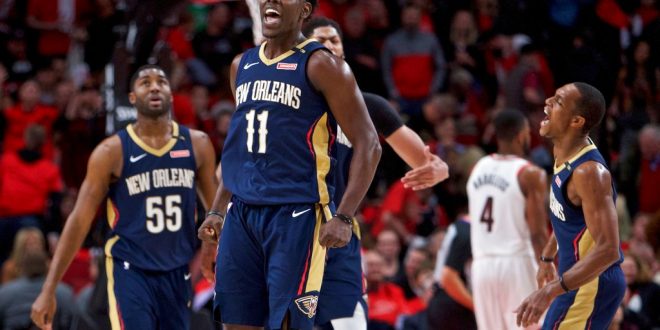 Pelicans Up 2-0 On Portland

Damian Lillard and the Trail Blazers are very disappointed with the start of their playoff series. They are currently down in the series by two games to the Pelicans, and face a must win game 3 Thursday night.

It is not surprising that New Orleans has been able to defeat them, because of how well Jrue Holiday has been playing alongside Anthony Davis. New Orleans’ backcourt will need to continue to play with physicality on the perimeter. If Portland can get hot from 3 they could tie the series at 2-2 in a flash. Unfortunately for the Pelicans they are without Demarcus Cousins to rebound and stretch the floor for the playoffs.

Jrue Holiday making the Portland crowd sound like the Coliseum in Gladiator when the tiger jumps on Maximus pic.twitter.com/oTmgxK2J7c

Lillard has opened the first two games shooting only 31% from the floor. In addition New Orleans has been playing great defense late in the first two games. Jrue Holiday has been a catalyst for New Orleans. In game two Holiday dropped 33 points. His perimeter defense has been remarkable. As a result CJ McCollum and Lillard have struggled. The Trail Blazers were one of the hottest teams entering the Playoffs. If they want to make it out of the first round the game tonight is a must win.

Especially relevant, New Orleans is playing with much more physicality than the Trail Blazers. It really shows at the end of the fourth quarter when the defense becomes more intense. Lillard says he feels the physicality that they play with. It shows in the numbers as well. Lillard is a -11 on the court so far this series. That’s some of the worst basketball he has played all year. It will be interesting to see if the Trail Blazers can bounce back and steal game 3. Now they are playing without home court advantage too.